iPhone 7 gets off to buoyant start in Korea

iPhone 7 gets off to buoyant start in Korea 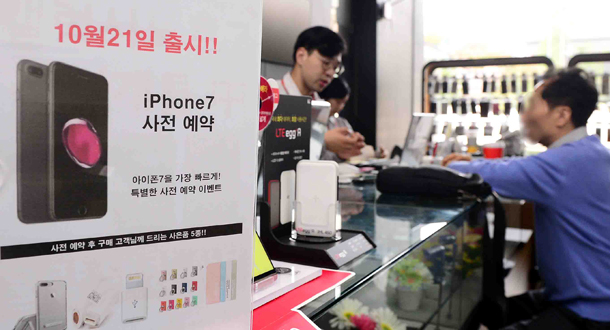 A KT office in Jongno, downtown Seoul, on Friday displays banners for preorders of Apple’s iPhone 7. Pre-orders were sold out only minutes after they began. [NEWSIS]

Pre-orders for Apple’s iPhone 7 in the local market began Friday with both Apple loyalists and customers burned by Samsung’s Galaxy Note7 lined up to get one of the first available.

According to nation’s three major mobile carriers - SK Telecom (SKT), KT and LG U+ - their first batches of products prepared for pre-sales sold out within minutes Friday.

KT began accepting pre-orders of the iPhone 7 and iPhone 7 Plus through text messages and its homepage from 9 in the morning. It sold over 20,000 iPhones in a minute. The 50,000 units in its first batch were sold out in 15 minutes.

SKT, which also began sales from 9 a.m., sold its first batch within 20 minutes. The carrier opened up a second round of pre-order sales by 9:30 a.m. Those phones sold out within an hour. Everyone who purchased an iPhone 7 series in the first or second round are guaranteed to receive phones within two days of the official release on Oct. 21, SKT said.

The smallest carrier, LG U+, also sold over 20,000 new iPhones within a minute.

A month ago, when the Galaxy Note7 was riding high in the market, analysts were pessimistic about the success of the iPhone 7 in Korea due to fewer-than-expected changes offered on the new device.

“The release of the iPhone 7 won’t be much threat to smartphone makers including Samsung Electronics since there was no big upgrade to the phone’s hardware and even Apple loyalists are looking forward to a phone to be released next year,” NH Investment & Securities analyst Ko Jung-woo said last month in a report.

After Samsung’s Galaxy Note7 was taken off the market after 54 days, the iPhone 7 is getting a boost.

MarketWatch, a financial information provider under Dow Jones, reported Tuesday after Samsung decided to halt sales of the problematic phablet, “CFRA Research analyst Angelo Zino said he expects the Note7 issues to help drive some Android users over to iOS, which he estimates could help increase Apple’s share of the global smartphone market by 1 percent.”

Other companies also hope to benefit, including Google, which recently entered the hardware market with its Pixel Phone, which operates on Android, the operating system that Samsung also uses. The Pixel Phone will be launched in the United States and Europe next week.

Other phone makers possibly benefitting include LG Electronics, which has introduced a wide-screen V20 smartphone, and China’s Huawei, which released its latest “H” smartphone last month.

“Samsung is giving coupons to Galaxy Note7 owners exchanging their phones so they will go with another Samsung-made phone,” a source from LG U+ said. “But considering the timing, many could convert to the iPhone 7 series.”

Prices and subsidies offered by each mobile carrier were released Friday, breaking the convention of announcing them on launch day.

The subsidies differ by carriers and monthly billing plan. In general, they are about half the amount offered to customers of the Galaxy Note7 or LG Electronics V20.