Running coach helps the blind to find their legs

Running coach helps the blind to find their legs 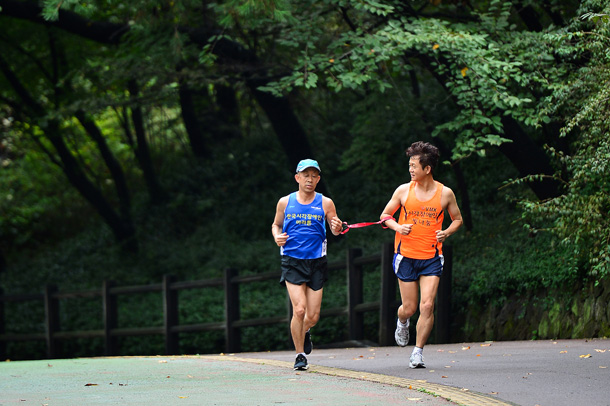 Ahn Gi-hyoung, a running coach for the blind and partly blind, runs a Namsan Park trail with his student in Jung District, central Seoul. [WOO SANG-JO]

A former marathon runner on the national team, Ahn Gi-hyoung, has taught marathon running to the visually impaired for the past 13 years. Ahn partners with his students every Saturday to run 6.6 kilometers (4.11 miles) at Namsan Park in Jung District, central Seoul. A 50-centimeter(20-inch) string connects Ahn and his student.

“If I see an obstacle,” said Ahn, “I pull the string to notify my student and prevent him from falling.”

Ahn started teaching members of Siloam Center for the Blind, a club for blind marathoners, when a member asked for his help in 2002. But it wasn’t easy, as most students had trouble following Ahn’s instructions. Ahn asked his students to touch his body in order to understand his posture, and it took three weeks for students to be able to stretch without assistance.

Ahn endeavors to teach from the perspective of his students, and on one occasion he even blindfolded himself and ran for a few hours with a partner’s assistance.

“Car noises sounded two to three times louder than normal, and holes on the floor seemed much deeper than usual,” said Ahn, “I’ll never forget the fear I experienced on that day.”

Frightening though it was, this helped Ahn gain a better relationship of trust and understanding with his students. Members of the Siloam Center for the Blind showed improvement in their performances and frequently won medals at the National Para Games.

“Seeing people who are blind or partly blind socialize more and stay healthy by running,” he says, “motivates me to keep running.”

“We moved through a jungle and swam across the river for seven days in the Jungle Ultramarathon,” said Ahn, “and we fought against sandblasts at 50 degrees Celsius [122 degrees Fahrenheit] in the Sahara.”

While other may call such races hell, Ahn felt pride in his companions and said they displayed true “runner’s spirit.”

Currently, there are roughly 50 members and 100 volunteers at Siloam Center for the Blind. Ahn always recommends the experience of running blindfolded to new volunteers.

“I’ll go anywhere if a blind or partly blind friend wants to run,” said Ahn, “and if I become too old to run myself, I still want to volunteer, at least by doing little things like handing water bottles to runners.”