‘To all travelers, stop planning and just go’

‘To all travelers, stop planning and just go’ 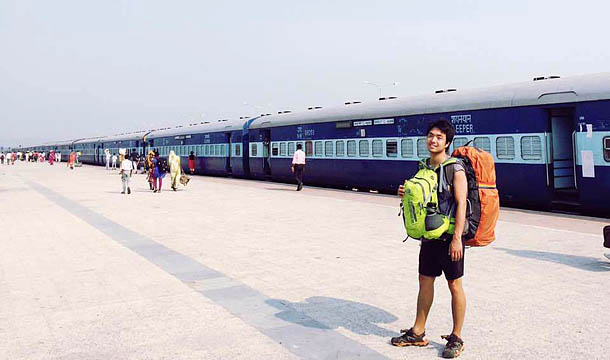 Kim Min-woo, the 29-year-old who traveled 54 countries in 361 days, boards a train to Varanasi, India, from Delhi last October. Buying plane or train tickets, or hitchhiking if he ran out of cash, and planning his trip as he approached borders, Kim says he spent some 12 million won (10,601 Dollar) to cover his travels. Having always wanted to become a world explorer, Kim is still traveling, though he says, “I can’t make a living out of this, I know. But right now, this is what I want to do and I can’t let other people make my decisions for me.” [KIM MIN-WOO]

“I’ve always wanted to become an explorer,” says 29-year-old Kim Min-woo. “It says so in my student report card from when I was 7th grade.”

Kim carries a business card that states his identity as “world traveler.” He handed the card out to strangers he met while visiting 54 countries over 361 days.

“But then,” he says, “I saw that my dream changed to becoming a teacher by the time I hit 9th grade. That made me sad, because it shows I was pressured to dream of things that are, well, more respected than others.”

While traveling the world is something on many people’s bucket list, not many actually take the necessary steps toward realizing their dreams.

“Whenever I told my parents or coworkers that I’d like to travel the world,” Kim says, “they told me, ‘Traveling is not going to put food on the table,’ or ‘Grow up.’ But one day I came home from work late, plumped down on my bed and the question that’s always lingered at the back of my head came back, and I knew I just couldn’t give up my dreams.”

Kim bought the plane ticket to the Philippines, his first destination, last year, without telling his parents - who were far from reserved in expressing their concerns about their son quitting a full-time job to travel. But for him, it was well worth it, not just for the places he saw but for the things he learned and people he met.

“I met a man in Nepal who was lugging bricks with his family at a site where a house used to stand,” Kim says about one experience he had in August of last year. “I asked him, ‘What is your dream?’”

The man merely shrugged, Kim recalls, saying he doesn’t have time for such things and that he’d be happy to be able to put food on the table for his family for another day. Kim was visiting the country only four months since a 7.8-maganitude earthquake struck near Kathmandu.

“But I knew that there was much more than that. Everyone has a dream,” he says. “When I asked him again, he suddenly broke down and said he’d want nothing more than for his youngest son, Rojen, then 4, to be able to go to school.”

Rojen was one of the six Nepalis lugging bricks and shoveling up the remains of a fallen house. He was working with his bare hands, wearing slippers and a stained t-shirt and jeans, like most of the other grown men at the site.

Rojen’s father, at the end of the 12-hour workday, would earn some 8,800 won ($7.77), Kim said, which barely fed the family. The whole family, including his wife, Rojen and his teenage cousins were working at the site every day, without proper shoes or tools.

Kim, who had known nothing about crowdfunding before he left Korea, posted a message on his blog that day, Aug. 28, 2015, asking everyone and anyone to donate from as little as 100 won to over 10,000 won, for 10 days, so that he could give whatever he collected to the family before he left.

Kim adds, “I was quite surprised by the success. People ranging from young college students working part-time jobs to office workers and volunteers took part.”

Kim spoke of Rojen and their family as his own.

“I still can’t forget the smile that Rojen had on his face when he wore his school uniform for the first time,” Kim says. “I also heard from Reshma’s school later that she is second in her class.

“After my time in Nepal,” he says, “I realized that investing just a few days out of my travels could change another person’s entire life.”

And his investment didn’t stop there.

At the end of his 361-day journey, Kim went back to Nepal last August with 5.5 million won, collected from 161 people via his online crowdfunding platform, and helped build a new library at the Kanya Mandir School in Kathmandu - where Rojen and Reshma are studying. The library was newly furnished with some 6,000 books, ranging from textbooks and dictionaries, not to mention the Harry Potter series.

“Another surprise was waiting for me at Nepal when I went back,” says Kim. “I collected video messages from people I have met all over the world, all saying in their own languages, ‘We love Nepal.’”

Kim says that, since his encounter with Rojen’s family, collecting video messages for Nepal became one of his purposes in traveling.

“Kantipur Television accepted my cold-call request to air it live after their news program on Aug. 2 at 9 p.m.,” he recalls. “I watched it with some of my friends in Nepal, and they also couldn’t believe my video made it onto Kantipur. It was surreal.”

Kim was also held up at gunpoint in the Philippines, rode in a stranger’s car for 10 hours from Geneva to Paris, had his underwear stolen while trekking through El Calafate in Argentina, slept with strangers on the floor of airports (“You just need a cardboard box and a few newspaper scraps and you’re set for the night,” Kim says), met a homeless family of Syrian refugees and saw bodies floating in the Ganges River - and through it all, he says he came to regard people from their own perspective.

“I was in India for weeks last September, and I was tired of people touching me everywhere I went and asking if I wanted to buy their musical instruments, ride their rickshaws, or get a tattoo,” Kim says. “One day, one of these street vendors tapped my shoulder again, asking for what seemed the hundredth time, to see if I wanted to get in a rickshaw.”

Kim says, “I lost my temper at him. But then I thought about how these people were someone’s family who would go home that night with what they earned for the day. After that, their term of endearment for every tourist, ‘My friend,’ became much dearer to me, too.”

He notes, “I don’t think traveling the world makes you a better person. It’s not like you’re going to become someone completely different by the end of the trip. You’re still who you are. Some travelers I met on my trip said their lives changed, while others said nothing changed after their trips. All I know is that I tried to do something meaningful during my travels, which aren’t over yet.”

Kim flew to Australia last week, where he intends to stay a couple of months, travel a bit more and “see where it goes from there.

“I never planned my first trip, either. When I left last year, all I knew was I was flying to the Philippines. Everything else was planned as I went. I know it sounds reckless, but planning everything perfectly doesn’t mean it turns out that way.

“In Korea, there is a saying that a man’s life hasn’t started until he turns 30. Well, I still have one year left, right? I cannot care for what people around me will think, because I don’t know if I’m going to be alive or dead tomorrow.”

Kim has trekked to the base camp of Everest, danced the night away in Siem Reap, Cambodia, dived into the depths of the blue ocean off the coast of Dahab, Egypt, and counted the stars in the velvety night sky of Isla del Sol, Bolivia, but he says Korea is still the only place he ever wants to live.

“During my travels,” he says, “I missed Korea’s fast-as-a-lightning Wi-Fi and convenience stores that are open 24/7 but, above all, I missed my family. Korea is where I grew up and where my family is, so really, there’s no place like home.”

Still, to all Koreans planning on traveling the world, Kim says get a move on.

“Korea’s visa power is quite amazing, you’d be surprised to find that a Korean can travel to so many countries without a visa,” he says. “Plus, if you travel from border to border, plane tickets are so cheap, too. And if all comes to naught, there’s always the option of hitchhiking, though you never know how the journey may end.

“Which is one of the merits to traveling. To all travelers planning their trip, I say stop planning and just go. I’ve seen people plan for a whole year but never get a move on. Just don’t forget this one thing - pack powdered soup for Korean ramen. It works wonders if you’re Korean.”