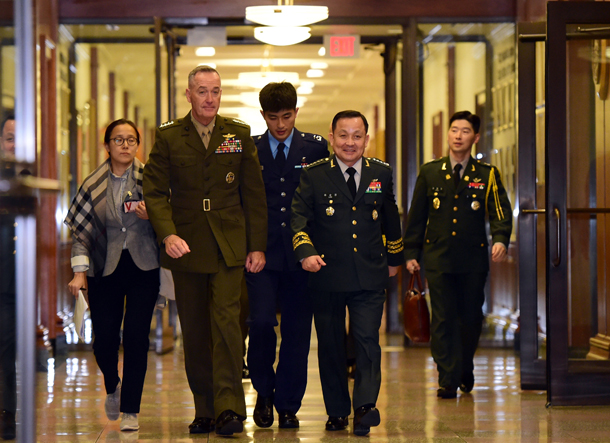 South Korea and the United States agreed to reinforce their extended deterrent capabilities against the North’s provocations at an annual Military Committee Meeting (MCM) in Washington on Thursday.

Chairman of South Korea’s Joint Chiefs of Staff (JCS) Gen. Lee Sun-jin met with his counterpart, Marine Corps Gen. Joe Dunford, chairman of the U.S. JCS, marking the first time that the heads of the two countries’ Joint Chiefs of Staff met face-to-face in six years. The MCM was conducted via videoconferencing every year since 2010. Their meeting on Thursday was the 41st MCM since 1978.

“Gen. Lee stressed the need to establish practical bilateral cooperation between South Korea and the United States to respond effectively to the North’s provocations,” Korea’s JCS said in their press release. “He also emphasized that the two countries will continue to work together on various channels, including the deployment of the Terminal High Altitude Area Defense (Thaad) system.”

The JCS added, “Gen. Lee also said it is vital to strengthen the bilateral mutual-assistance system against the North’s development of submarine-launched ballistic missiles.”

Gen. Dunford upheld the U.S. commitment to defend South Korea, saying the U.S.-Korea alliance will “continue to grow firmer and stronger, and the U.S. will continue its ironclad commitment to the defense of the Korean Peninsula,” according to the Pentagon’s statement.

Under the extended deterrence, or nuclear umbrella, of the United States, Seoul and Washington in July decided to deploy the U.S.-led Thaad system to the peninsula as a precaution against military provocations by North Korea, which conducted its fifth nuclear test on Sept. 9, its strongest to date and second this year.

“[Chinese companies near the border with the North] are going to have to tighten up and shut down operations,” said U.S. Assistant Secretary of State for East Asian and Pacific Affairs Daniel Russel in a meeting at Pentagon on Wednesday, local time, according to the AP. Russel also said the nuclear program has only diminished the North’s security.

“Put yourself in Kim Jong-un’s place,” Russell said, according to the AP. “That is not a good place to be. Perhaps he’s got an enhanced capacity to conduct a nuclear attack and then immediately die, but that can’t be plan A.”

Hillary Clinton, the U.S. democratic presidential candidate, also had called for stronger measures from China to sanction the North. According to her statement, revealed by WikiLeaks, Clinton had privately said Washington could “ring China with missile defense” if Beijing failed to check the North’s nuclear advancement, the AP reported on Thursday.