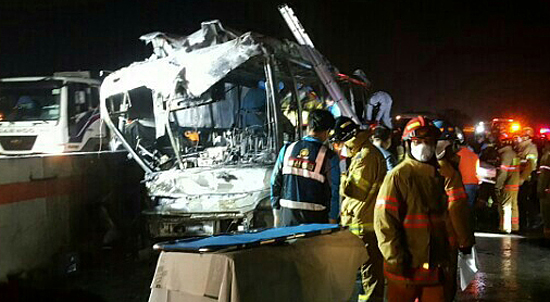 A bus returning retired couples home from a trip abroad crashed into a concrete guard rail on a highway in Ulsan Thursday night and caught fire, killing 10 and injuring seven out of its 20 passengers.

The passengers were retired employees of Hanwha Chemical and their families returning from a trip to China. They landed at Daegu International Airport at 7:55 p.m. Thursday and the bus was bringing them home to Ulsan.

Their group’s friendships date back to 1979.

“In the first seven years at Hanwha, we’ve seen each other get married and have children,” said a 61-year-old member of the group surnamed Yoon, who did not travel with the group to China because he had a recent operation.

“They are like my brothers and sisters. Now half of them are gone,” Yoon said. “I don’t know if I can erase their names from my phonebook.”

Authorities arrested the bus driver Thursday and said he had a record of traffic regulations, including drunk driving and driving without a permit. Police confirmed the driver was not drunk at the time of the accident, but have not ruled out the possibility that he may have dozed off at the wheel.

“Lee has been driving tour buses for six years and police are investigating how many times he violated traffic rules since then.”

CCTV footage shows the bus ramming into a concrete guard rail set up at a construction site on Gyeongbu Expressway, about 1 kilometer (0.6 mile) from the intersection of the Ulsan Expressway and Gyeongbu Expressway in Ulju County, Ulsan. It came to a stop some 150 meters from the point of collision.

A fire started almost immediately from the back of the bus, where the engine was located, and grew large.

The testimonies of the driver and passengers differ on several accounts.

“The right tire on the front of the bus popped, and I lost control of the bus, which rammed into the guard rail and caught fire,” Lee said. “I tried to use the fire extinguisher, but it didn’t work.”

A total of 10 passengers escaped the bus. A 62-year-old man surnamed Lee was one of them.

“The bus driver said the tire burst first, but I don’t think that’s right,” he said. “The bus was driving on the left lane of the road, when it suddenly swerved to the right lane and crashed into the guard rail.”

“I shouted to the bus driver when it hit the guard rail, ‘What are you doing? Hit the brakes!’ but the bus continued to skid along the concrete guard rail for some 200 meters,” added Lee, who was sitting on the fourth row from the back of the bus.

The ten passengers who died could not escape because the door of the bus was jammed in by the concrete guard rail. The ten who survived broke the bus windows and escaped.

Passengers said they had a hard time finding emergency hammers on the bus.

“I tried to look for an emergency hammer after the crash,” Lee said. “But I couldn’t find one even when I used the light from my cellphone. I could only get out when someone broke a window from the outside the bus.”

“The people sitting behind us did not make it out,” said a 59-year-old survivor surnamed Lee. “My husband kept kicking the window, which finally broke and we were able to escape.”

Taehwa Tour, which operates the bus, said there were four hammers on the bus.

“The bus, which can carry a maximum of 45 passengers, has four emergency hammers,” said a Taehwa Tour employee. “There are two available at the front of the bus and another two at the back.”

Authorities are investigating whether the bus had the hammers.

They also requested autopsies on 10 passengers to confirm their identities, as their bodies were badly damaged by the fire. After the fire was extinguished, only the metal frame of the bus and its seats were left.