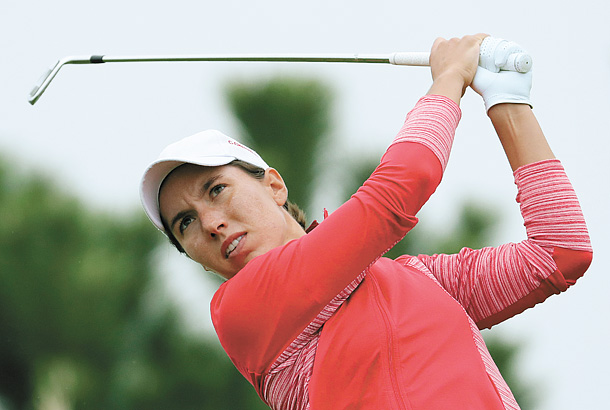 Carlota Ciganda of Spain watches her shot during the final round of the LPGA KEB Hana Bank Championship on Sunday at Sky72 Golf Club in Incheon. Ciganda claimed her first victory at the U.S.-based circuit from the event. [AP/NEWSIS]

The LPGA KEB Hana Bank Championship, the only LPGA event in Korea and third on the tour’s Asian leg, started with promise for Korean-American Alison Lee, but several setbacks on the putt eventually put her behind Carlota Ciganda of Spain, who clinched her first LPGA title after a gripping playoff round on Sunday.

Going into the tournament’s final day, Lee, who joined the LPGA in 2015 but has yet to grab a win on the U.S.-based tour, emerged as leader of the tourney up until the 54th hole, going 65-70-68 through the third round.

Her spot at the top, though, was not meant to be as she struggled through a drizzly Sunday during the tournament’s final round.

Starting out the fourth round with five pars, Lee quickly fell into a pit, making four bogeys from the sixth to 10th holes and taking a huge hit to her standing in the leaderboard. As Lee struggled to save her shots, Ciganda of Spain rose steadily up the ranks, shooting five birdies in the first half of the round alone.

As diametrically different as their performances were in the first half, the dynamics of the match changed in the second half.

After the 10th hole, Lee looked adjusted to the weather, saving par on four straight holes from the 11th to 14th. She then tallied her first birdie of the day at the 15th, narrowing the gap between her and the leader to three strokes.

Lee was in a pinch again at the 16th hole but recorded par with a sharp approach, eventually tying the match with a birdie at the 17th.

While Lee made a solid effort, Ciganda was seen slipping out of her pace. Her struggle peaked at the 14th hole, when she recorded a double bogey. She then bogeyed at the 16th, which essentially paved the way for Lee to tie the match.

The 18th hole turned out to be the most climactic. Tied at first, Ciganda teed off before Lee but bogeyed the hole, retreating down a step in the ranking. All Lee needed now was to par the 18th and end the event.

But Lee instead saw her third approach sink into the water near the green. Taking a penalty, she also bogeyed the hole to drag the match into a playoff round.

Back on the 18th, Ciganda had her ball only a few feet away from the hole while Lee’s ball was in the rough on the opposite side of the green.

Lee almost forced the playoff to a second round, nearly nailing a birdie on her fourth shot from well beyond the green. But the ball stopped just inches away from the hole. Ciganda then drained an eight-footer, ending her improbable run to tally her first victory in the U.S.-based tourney.