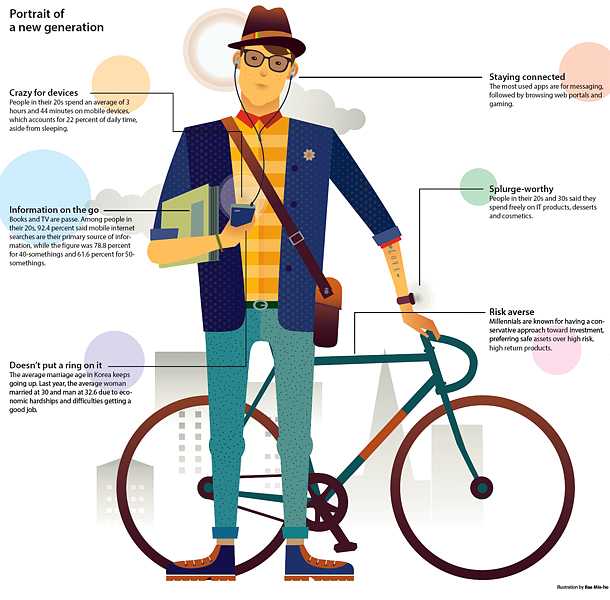 Every time Yoo Yeon-joo, a 24 year-old college student, goes to a fancy restaurant with friends, a ritual occurs throughout the meal that is alien to her father’s generation: taking care to snap pictures of each dish in carefully managed lighting, from careful angles.

Upon arriving home or even on the way there, the photos are shared on Yoo and her friends’ accounts on Instagram, a photo sharing app that Yoo uses at least once every day.

“It’s a tacit rule that we don’t start eating right away,” Yoo says. “Before eating, we must capture the moment from the best possible angle. We do so to preserve memorable moments.”

Researchers say the generation is heavily focused on their “self” and the experiences that define them - and are compelled to share those self-validating experiences.

The obsessions, habits and shifting values of the millennials are guaranteed to reshape Korea and its economy by dint of sheer numbers. They have become a dominant demographic force.

The group aged between 15 and 35 now has a bigger head count than the generations that preceded them: Generation X, born between the late 1960s and 1979, and the post-war baby boomers, born between 1955 and 1963, according to 2015 census data from Statistics Korea.

Millennials now account for over a fourth of Korea’s entire population.

As millennials grew up with the technological breakthroughs of the 1990s and 2000s, the internet, computer games, social media and instant messaging an integral part of their lives.

They are both more plugged in and more unplugged than any other age group. Technology is a very extension of their own selves. Many must post what they eat, buy and do via social networks such as Facebook and Instagram.

Yoo In-oh, CEO of trend research center METATREND Institute, says a self-centered tendency among millennials stemmed from the environment in which they were raised.

“Millennials have higher self-esteem since they were raised by doting parents who wanted the best for them in an affluent society,” says Yoo, whose institute oversaw the Korean edition of “Marketing to Millennials” by Jeff Fromm and Christie Garton.

“So when purchasing goods, a certain mindset comes out. They like buying items that are somewhat representative of themselves or their tastes.”

It is not just the number that makes the generation so important. In 10 to 20 years, the millennial generation will reach their prime spending years and become the stoutest pillar of the economy.

One of the most distinctive aspects of Korean millennials is their affinity for technology - even compared to their peers abroad.

The International Telecommunication Union, a United Nations agency for information and communication technologies, says that 99.6 percent of Koreans aged 15 and 24 are classified as digital natives, a term that refers to people familiar with computers and the Internet from an early age.

That figure was the highest among 180 nations surveyed in a report called “Measuring the Informative Society 2013.”

Korean millennials have more profound differences from the generations that preceded them. Many are delaying key life milestones such as marriage and having children because of financial difficulties and prolonged unemployment. Less job stability has also led that age group to delay or forego the ownership of traditionally important commodities such as houses and even cars.

“It seems that many don’t feel compelled to follow up with social norms that say they need to buy something at a certain stage of life,” says Lee June-young, professor at Sangmyung University’s Department of Consumer & Housing Studies.

Of all things, the biggest difference among Korean millennials and their counterparts in other countries is a distinctly pessimistic view of the future.

Korea was the only country in a Pew Research Center spring 2014 survey in which millennials were less likely than those over 50 to say children today will be better off financially than their parents.

The purchasing behavior of Koreans in their 20s and early 30s can come off as enigmatic. They are sometimes extremely frugal, leveraging their technological prowess to get the lowest price, special discounts and coupons. They become extravagant when seeking out specialty coffee shops and desserts - priced well above the cost of a humble dinner - and taking trips to exotic places.

Different mechanisms are at play.

“With their limited budgets, they try to save on items they see as less meaningful. But they are willing to pay more on something that could allow them to enjoy a unique and pleasant moment,” says Professor Lee.

The items that millennials spend a relatively high portion of their incomes on provide clues to their expectations and motivations for buying things.

Items such as desserts, cosmetics and IT products are cited as items millennials consider valuable enough to spend more generously on, according to a survey conducted by market research firm Macromill Embrain.

For instance, 37.8 percent of people in their 20s said that they are “investing” in interesting or unique food, compared with 24.4 percent of those in 40s and 25.4 percent in their 50s.

Kim Jeong-hyun, a 28 year-old woman who works at a tech company, says that dining at pricey places is not the mere occasional splurge.

“I have a regular reunion with my college friends,” Kim says. “When we meet, we are looking for trendy restaurants because the good food and unique interior design will make our gathering more joyful.”

To find the best restaurant, Kim relies on searches of social networks rather than advertising, which is another unique characteristic of the younger generation.

Younger people are influenced by photo postings online and testimonials. They can anticipate the kind of experience they will have and gain information in a more interactive way.

Among those in their 20s, 92.4 percent said an internet search on a mobile device is their primary source of acquiring information, while only 78.8 percent of 40-somethings said that, and 61.6 percent of people in their 50s, according to Macromill Embrain.

The evolving preferences of millennials have already influenced the way that retailers operate.

Brick-and-mortar retailers have come to terms with the fact that e-commerce players have a big edge in terms of price competitiveness. Shopping online is always cheaper.

So when Chung Yong-jin, vice chairman of Shinsegae Group, built the country’s largest shopping mall - Starfield Hanam in Hanam, Gyeonggi Province, which opened September - his main objective was to make customers stay in the mall as long as possible. Chung says baseball stadiums and theme parks are Starfield Hanam’s competitors.

While millennials place a premium on products worthy of special attention, they take a more flexible approach to the ownership of traditional must-haves such as automobiles and residences.

Park Hyung-jin, a 30-year old who works at a trading company, has no interest in owning a car. He relies on Socar, a car-sharing app.

“Buying a car can translate into increased expenses in general because of the gasoline and maintenance,” he says.

“I concluded that it would be more efficient to use the app or just use public transportation.”

He is a part of the growing set that has not time for traditional concepts of ownership.

The number of 20-somethings that registered new cars declined 1.7 percent in 2014, according to the Korea Automobile Manufacturers Association.

Jeremy Rifkin, author and economist, predicts that when the younger generation becomes the backbone of the economy, such practices can become the norm.

“Twenty five years from now, car-sharing will be the norm, and car ownership an anomaly,” he says, according to a Goldman Sachs report.

The concept of sharing particularly appeals to millennials because they face the lowest income growth of all age groups.

For the poorer generation, experts advise companies and marketers to roll out rental services for a range of products and services.

“There will be growing demand for other types of on-demand services or apps like Kakao Taxi,” says Professor Lee.

Limited disposable incomes and a gloomy economic outlook has made Korea’s millennials more cautious when they make investments, a contrast to the assumption that young people tend toward high-risk, high-return bets.

The Hana Institute of Finance released a study last year showing that people in their 20s and 30s subscribed to safe financial products at a higher rate compared to older generations.

Safe products include bank accounts that give owners priority when renting apartments and subscribing to fixed-rate bank deposit accounts.

They show the lowest demand for high-risk products such as some mutual funds.

“When we gave consulting advice to people in their late 20s and early 30s in the past, we recommend an investment with high yields,” says a financial consultant at a major securities firm in Apgujeong-dong, southern Seoul. “We have changed our advice to suggest safe assets such as gold or dollar investments.”

Set up an independent committee