In the name of the law

In the name of the law 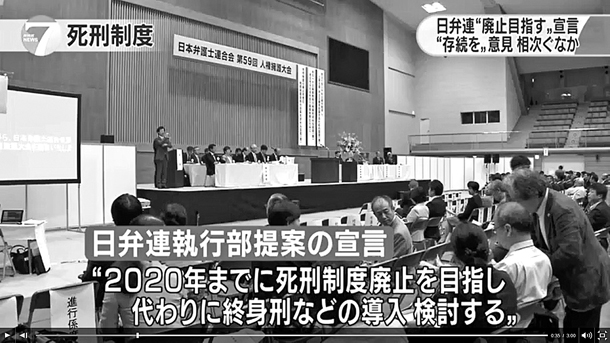 Kerry Drewery’s recently published book “Cell 7” depicts a dangerous society where the judicial system has collapsed and criminals accused of murder are no longer tried in courts but through the votes of viewers watching trials on television. “Justice lies in your hands, dear viewer,” the show’s narrator says. “Press 7 for guilty, 0 for innocent.” If more viewers choose guilty, the defendant is executed immediately.

In ancient times, execution was common. “If anyone breaks into a house to steal, he will be put to death before that point of entry and be buried there.” The theory of repenting for the crime of killing another person with one’s own death is still valid. The bigger problem is the possibility of viewers in the novel or judges today being deceived by the public or misinterpreting evidence. There is always a possibility that one may be falsely charged and executed.

On Oct. 7, three days before the 14th World Day Against the Death Penalty, the Japan Federation of Bar Associations adopted a “declaration on the abolition of the capital punishment system.” The federation wants to abolish the death penalty by 2020 and introduce lifetime imprisonment without the possibility of parole as an alternative. Lawyer Yuichi Kaido emphasized that no one can take away one’s life from another.

In postwar Japan, four death row inmates have been acquitted on retrial. Eighty-year-old Iwao Hakamada served 48 years in prison for murder, but he was released after new DNA evidence proved he was not guilty in 2014.

Eight death row inmates have been executed under the Shinzo Abe government after Hakamada’s release. The administration’s minister of justice, Katsutoshi Kaneda, is against getting rid of the death penalty because he says it is sentenced to heinous criminals through prudent trials. Despite repeated recommendations from the United Nations to abolish it, Japan maintains the death penalty because of public opinion. A 2014 survey by the Ministry of Internal Affairs and Communications showed that 80.3 percent of respondents supported the death penalty while only 9.7 percent wanted its abolition.

Ever since 23 death row inmates were executed in 1997, Korea has entered a de facto moratorium on the death penalty. But it has been only stopped there because the public is still against the complete removal of capital punishment. A Korea Legislation Research Institute survey last year showed that 65.2 percent of respondents supported capital punishment.

A bill proposing complete abolition of the death penalty in Korea is being prepared again in the 20th National Assembly. Let’s hope to have a composed and full discussion on capital punishment, a system that allows the state to take away the life of a citizen in the name of the law.