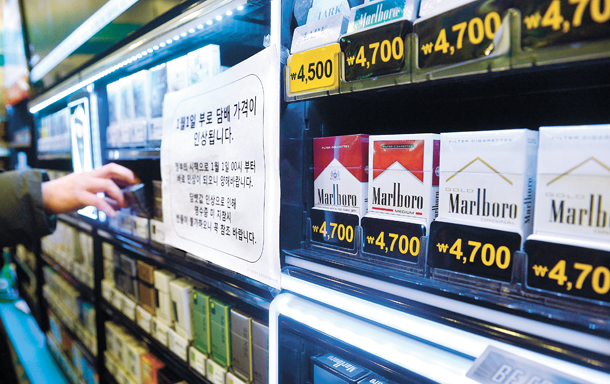 Although the government raised cigarette prices from 2,500 won ($2.20) a pack to 4,500 won in January 2015 to reduce the number of smokers in the country, saying this would lower the smoking rate from 3 to 5 percent, tobacco consumption in Korea has in fact increased compared to the previous year.

According to Ministry of Strategy and Finance last week, there were a total of 2.76 billion packs of cigarettes sold during the first nine months of this year, which is 13.3 percent higher compared to the year before.

Even though the amount of tobacco sold in Korea rose compared to the previous year, the government has argued that it dropped compared to two years ago, before it raised prices.

“The year-on-year rate rose, as there was a sharp drop in consumption in early 2015,” said Kim Wi-jung, a director at the Finance Ministry, “but the figure for the third quarter shows that it didn’t grow compared to the previous year and that it appears the price increase is clearly lowering the number of smokers. The year-on-year growth rate is slowing and we believe this suggests consumption is dropping, as well.”

But Park Young-sun, a lawmaker from the opposition Minjoo Party, has argued that the government’s decision to raise the price of cigarettes has had no impact on consumption in general.

“The government has been saying that the price hike is dragging down consumption,” said Park in a press release earlier this month, “but the data shows it’s actually growing compared to the last year.”

Park’s data, which she says she obtained from the Korea Customs Service, shows that cigarette sales from Korea’s duty-free stores soared 40.3 percent to 211.1 million packs in 2015 compared to the previous year.

And the figure for this year up until August also increased by 27.4 percent year-on-year to 155.3 million packs.

According to the Jeju Free International City Development Center, which operates duty-free stores on the southern island of Jeju, its monthly sales of tobacco products recorded 7.2 billion won this year up to August, a 360-percent increase compared to the average figure from 2012 to 2014.

Park also argued that this isn’t the only detrimental result of the price hike, noting that “Tobacco companies have made tremendous profits by storing tobacco before the price increase in order to avoid paying higher taxes.”

Tobacco companies in Korea have allegedly evaded more than 200 billion won in taxes by selling tobacco manufactured before the new price went into effect.

On top of that, the government caught 3.64 billion won worth of cigarettes smuggled into the country last year, the Korea Customs Service said.

The figure soared to 6.66 billion won this year through June. One industry insider who has been dealing with illegally distributed tobacco for about 20 years said tobacco smuggling methods are becoming more sophisticated, too.

“After the price hike,” he said, “we are finding more large-scale smuggling cases.”

According to a paper published by the U.S.-based National Bureau of Economic Research in 2012, raising the price of tobacco products has had limited impact on the smoking rate.

“There is a general consensus among policymakers that raising tobacco taxes reduces cigarette consumption, but evidence is relatively sparse,” the paper said. “Alternatively, as cigarette taxes and prices continue to rise, smokers are taking other steps to thwart the impact of the price increase, such as switching brands and increasing purchases on the black market.”

The opposition parties have criticized the government’s decision to increase the price, saying that they only did so to collect more taxes. According to Ministry of Strategy and Finance, the government collected 10.53 trillion won in tobacco taxes last year, up 51.3 percent from 2014.

The cost of a cigarette pack only accounts for 26 percent of the retail price, or 1,182 won, while 54.5 percent is derived from taxes and other government charges used to promote public health.

Yet the WHO Framework Convention on Tobacco Control says on its website that “Increasing the retail price of tobacco products through higher taxes is the single most effective way to decrease consumption and encourage tobacco users to quit,” adding that “tobacco taxes are particularly effective in preventing or reducing tobacco use among the young and the poor.”

Households with a monthly income of 3 to 4 million won or more, however, spent 22.7 percent more on cigarettes compared to the previous year.

The government said it expects consumption to drop further as they plan to have tobacco companies put warning labels on every cigarette pack sold in Korea starting from Dec. 23. But industry insiders say that looking at data from other countries that have already adopted such measures, warning labels will have limited impact on consumption.

According to the U.S. Food and Drug Administration’s study on Canada, for instance, smoking rates after graphic warning labels were mandated only dropped by 0.088 percentage points.

According to data from the Organization for Economic Cooperation and Development, however, graphic warning labels helped consumption drop. The data showed that consumption in 10 countries that have adopted the graphics on cigarette packs, including Canada, Australia and the United Kingdom, consumption fell 8.4 percent on average during the first year after the new law went into effect. It has dropped by 4.1 percent on average starting from the second year.

The smoking rate dropped the most in Brazil -13.8 percent - while the figure remained unchanged in the United Kingdom and Hungary.

Moreover, Park notes that the government has already tried a price hike once before in 2005, “but it didn’t help lower the smoking rate significantly and the government’s decision to raise it in 2015 won’t be any different.”

The government raised the prices from 2,000 won a pack to 2,500 won in 2005, hoping the smoking rate would drop by 3 to 5 percent, but according to data released by Park, consumption rose significantly before the new price went into effect, briefly fell, then rebounded back to where it was after two years.

According to the government, Koreans bought 5.15 billion packs of cigarettes in 2004, the year before the price increase, but that figure fell 23 percent to 3.94 billion packs in 2005.

“The consumption at the military bases is expected to rise 2 percent year on year to 31.1 million packs this year,” Park added, “if the current pattern continues.”

An industry insider has argued that the government also is not using the extra money collected, as it said it would, to promote health.

Yet antismoking civic groups argue that the government still has more room to raise the price since the price in Korea is still low compared to the OECD average of $6 a pack.

“The bill needs to be passed as early as possible,” Park said, “in order to reduce the tax evasion from the illegally distributed tobacco.”