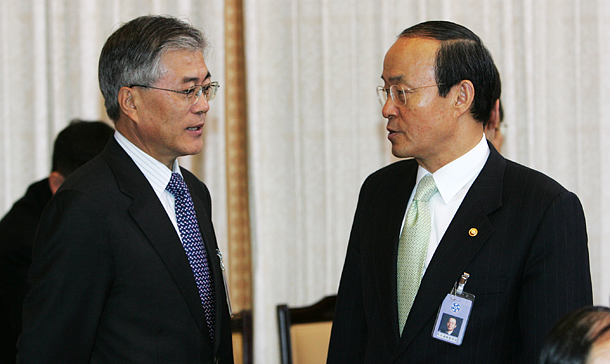 A former South Korean diplomat’s memoir in which South Korea is said to have abstained from a 2007 UN resolution on North Korean human rights violations after it had asked Pyongyang’s advice about it has sparked a political firestorm.

Song Min-soon, a former foreign affairs minister in the Roh Moo-hyun government, said in a recently published memoir that Seoul abstained from a UN vote to raise the issue of Pyongyang’s human rights violations after the Roh government asked North Korea’s opinion before the vote.

In the memoir, the former diplomat said he supported a vote in favor of the resolution, which was at odds with other top officials including director of the National Intelligence Service (NIS) Kim Man-bok and presidential chief of staff Moon Jae-in.

“I told them, ‘Why would we need to ask the North about such an issue when their response is so predictable? We should vote for the resolution with a longsighted vision,’” recalled Song in the memoir “A Glacier Moves Inevitably,” published earlier this month.

Song’s accounts of what unfolded on determining what to do in the 2007 vote describe the foreign ministry favoring the resolution, which put it at odds with the NIS and the Unification Ministry, which was headed by Lee Jae-jung, who currently heads the Gyeonggi education office.

Song recalls that it was NIS chief Kim who floated the idea of asking the North of its opinion on the resolution, an idea Song opposed on the ground that Pyongyang’s response would be obvious: a warning that a yes vote would harm inter-Korea relations.

According to the memoir, Song sent a hand-written letter to former President Roh on Nov. 16, 2007 in which he pleaded for a vote in favor of the resolution. He argued that the vote would not affect Pyongyang’s stance on inter-Korea relations and that an abstention would tie his hands in persuading the North to give up its nuclear program.

In the letter, Song mentioned Seoul’s approval of a resolution a year before despite Pyongyang’s protest and made that point that the North had not taken any action to jeopardize inter-Korea relations despite its rhetoric. Song noted in the letter that the North always accepted dialogue when it felt doing so would meet its needs.

According to the book, former intelligence chief Kim proposed the idea of asking for Pyongyang’s opinion on Nov.18, three days before the vote in New York. In his account, presidential chief of staff Moon, Baek Jong-chun, presidential foreign and security policy advisor and Unification Minister Lee approved of the idea while Song voiced strong opposition. Song writes that the discussion ended in favor of Kim’s idea as chief of staff Moon agreed to ask Pyongyang’s opinion on the matter via an inter-Korea channel.

“I was overwhelmed with a sense of shame as I left the Blue House,” writes Song.

The North’s reply was what Song had anticipated, according to the memoir. The North warned that Seoul’s approval of the resolution would not be justified and would lead to a “serious crisis” in inter-Korea relations. It also said it would keep a close watch on Seoul’s decision.

With Seoul abstaining, the 2007 resolution on the North Korean human rights condition was passed 97 to 23 on Nov. 21. 60 nations, including South Korea, abstained.

Song’s memoir has had a political impact because how to deal with the Communist North has always been a sensitive and explosive topic in a country sharply divided along ideological lines.

Song’s memoir has the potential of painting former top Roh government officials as too accommodating or even coddling to North Korea under the Sunshine policy of engaging Pyongyang.

Conservatives blame the two liberal governments for the North’s progress in making nuclear weapons, claiming cash sent to Pyongyang in the name of inter-Korean cooperation financed its weapons program. Liberals rebuff the argument, arguing it was a hard-line stance taken by the Park Geun-hye government and her predecessor that has pushed the North into a corner and left it little choice but to hold onto its nuclear option.

Inter-Korea relations remain frozen in the aftermath of the North’s tests of nuclear weapons and missiles.

Former officials described in Song’s account denied the story. Former NIS director Kim told the JoongAng Ilbo that he didn’t propose the idea of asking the North and top officials didn’t even discuss such a request to Pyongyang.

“Why would we have asked the North when their response was obvious?” asked the former intelligence chief.

Former Unification Minister Kim also refuted the claim. At the center of the controversy, Moon said in a Facebook post Saturday that former President Roh had decided to abstain from the vote because a majority of government officials called for such a move.

“The Foreign Affairs Ministry strongly pushed for a yes vote while the Unification Ministry wanted to abstain,” noted Moon, adding the majority of other officials were for an abstention. “After thoroughly hearing opposing opinions, he opted to abstain in line with the majority opinion.” Moon, however, neither confirmed nor denied Song’s claim that the Roh government had asked for Pyongyang’s opinion on the 2007 resolution vote.

In response to the denials, Song said Sunday his accounts of what happened in 2007 were as “solid as a hard rock.”