After a poor season, Samsung Lions replace their manager

After a poor season, Samsung Lions replace their manager 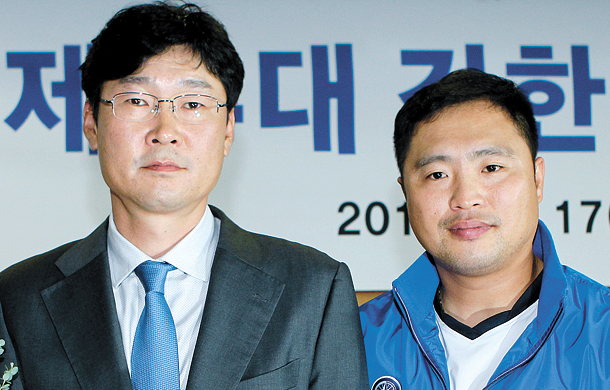 Kim Han-soo, left, with Park Han-yi, captain of the Samsung Lions, during a press conference on Monday. Kim will take up the team’s managerial post after the Lions failed to advance to the postseason this year. [SAMSUNG LIONS]

A couple of familiar faces will be missing from this year’s Korea Baseball Organization (KBO) postseason and beyond.

For the first time in seven years, the Samsung Lions, historically a league powerhouse, will not be playing in the playoffs. And starting next season, their skipper, Ryu Joong-il, who has been with the Lions since their heyday, will not be returning to the dugout.

The Lions announced Saturday that they would not be extending the manager’s contract. In his stead, Kim Han-soo, the team’s hitting coach and a franchise star himself, will assume the managerial post.

While the shake-up at the top seemed inevitable for the Lions, who failed to advance to the postseason this year, the decision still came as shock. Ryu has been a Lions man for 30 years and led the team when it reached its pinnacle, clinching four postseason titles from 2011 to 2014. 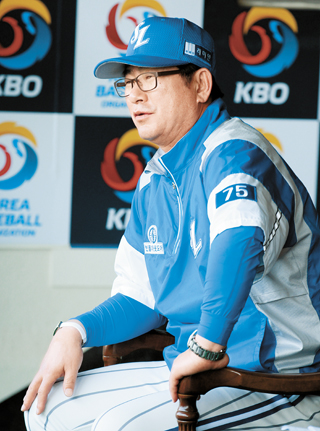 Ryu Joong-il, the Samsung Lions manager who led the team to four Korean Series titles from 2011 to 2014, was replaced after just one poor season. [YANG GWANG-SAM]

Ryu made his career debut with the Daegu-based club in 1987, playing as shortstop, until his retirement in 1999. Even after hanging up his gloves, Ryu stayed on as a coach until he finally stepped up to manager in 2011.

Under his watch, the Lions won the Korean Series, the KBO’s postseason championship series, from 2011 to 2014 and finished as runner-up last year. During that period, the Lions also claimed five KBO season pennants.

But this year, the Lions’ standings in the league took a nosedive, eventually finishing ninth. “Objectively, right now, we are not championship material,” said an official at the club. “But we need to make it into next year’s postseason, and the decision was to prepare ourselves for the future.”

Kim, the man set to replace Ryu, is as much a Lions legacy as his predecessor. Starting from 1994, he spent 14 years playing third base for the team, winning numerous accolades along the way, including six Golden Glove Awards and three Korean Series titles. He batted .289 throughout his career while hitting 148 home runs and 782 runs batted in.

Kim signed a three-year contract Monday worth 900 million won ($789,000), with a 300 million won signing bonus. After his official introduction as the new manager, Kim said at a press conference that he felt heavy responsibility taking up the job and trying to extend Ryu’s legacy.

“I talked to Ryu over the phone after the announcement,” Kim said. “Before saying anything, I apologized. I was the hitting coach of the team this year. I felt I am also responsible for the team’s poor showing.”

Putting everything aside, the new skipper thinks it’s time for the club to start from zero. “We need to start thinking about where we want to go from here,” Kim said. “We are essentially starting from the ground here.

“What we need to do now is rear players from early on. We also need to encourage competition among players for their own improvement as well as that of the team.”

Having gone straight from player to coach for the same team just seven years ago, there is little boundary between Kim and his teammates, and that in itself is expected to become a vital asset. Communication between the boss and players is now more crucial than ever for the struggling Lions.

“We should not fall into narcissism from our past success,” Kim said. “We won’t let the support of the fans go to waste [this coming season].”