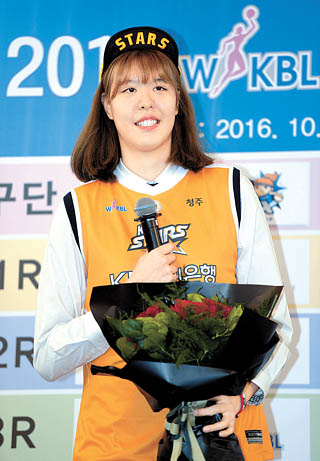 Park, the youngest player in Korean basketball history to qualify for the national team after being listed on the pre-roster at the age of 15, is considered the next star in Korean women’s basketball. She is the daughter of former men’s national basketball team center and Myongji University Coach Park Sang-kwan and former national youth volleyball team player Lee Soo-kyung.

During the Rio Olympic qualifications round, Park led the Korean women’s team and averaged seven points and 10.8 rebounds.

Ahn Duk-su, head coach of the Stars, reportedly leapt out of his seat when he discovered his team had the privilege of first pick at this year’s draft. “How fortunate I am for this,” he said.

“I would like to show my gratitude to the team for picking me,” Park said. “I hope I can shake things up at this upcoming season.”

The Korean U-19 football team defeated host Bahrain 2-1 in the group stage of the 2016 Asian Football Confederation U-19 Championship at Khalifa Sports City Stadium on Sunday evening.

Coming out of a win against Thailand, the young Korean team, led by Coach An Ik-soo, was optimistic. However, the first half of the match against Bahrain ended in a 0-0 draw, and the Koreans then found themselves giving up the lead early in the second half.

It wasn’t until there were six minutes left on the clock that Korea managed to turn things around. Cho Young-wook bested Bahrain’s goalie with a stab to the left side of the net and then scored another goal during injury time to lift Korea over the host.

“Cho is actually two years younger than this age group, but nevertheless, we brought him here because he has talent,” Coach An said. “We feel Cho is improving in each game, and the player also feels responsible and is improving, too, so I’m happy with his performance, and I look forward to him having a bright future in Korean football.”

With the Korean U-19 team’s win over Thailand and Bahrain, they will likely advance to the quarterfinals as the top of their group.

The CJ Cup at Nine Bridges, taking place next October, will be the first official PGA Tour event taking place in Korea. In the past, Korea has hosted events sanctioned by the PGA, such as the Presidents Cup last year, but not a regular tour event.

Nine Bridges, which is located on the southern resort island of Jeju, is a course run by the conglomerate. It is the first Korean golf course to be listed as one of Golf Magazine’s top100 golf courses.

CJ Group is the second Korean conglomerate to host a PGA Tour event. Genesis, the luxury brand of Hyundai Motor, is the sponsor of the Genesis Open in Los Angeles, starting from February 2017. Before Genesis, Hyundai Motor hosted the Hyundai Tournament of Champions from 2011.