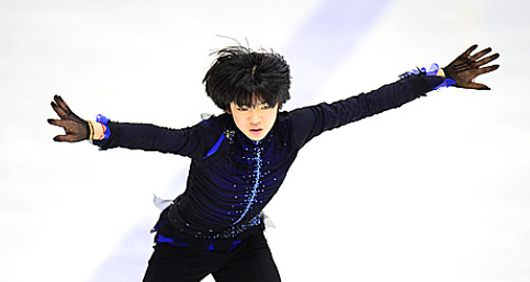 At the age of 14, Cha Jun-hwan is one of the country’s rising stars in figure skating, as Korea looks to extend the legacy left by Kim Yuna. Cha is the second Korean skater, and first among males, to clinch two gold medals from the ISU Grand Prix. Cha has qualified for the Grand Prix final slated to take place in December in France. [NEWSIS]

Ever since Kim Yuna hung up her skates two years ago, Korean figure skating has been in somewhat of a dry spell - or so it seems.

Enter Cha Jun-hwan, a 14-year-old sprout from Seoul who has recently taken the country by storm.

Cha has topped a national ranking event, the Korean Figure Skating Presidential Cup, for two straight years. Just coming out of winning the men’s singles title at the International Skating Union (ISU) Junior Grand Prix in Dresden, Germany, from Oct. 5-9, the young talent scored 89.62 in technical elements and 77.00 in program components during a free skate on Sunday.

Adding to the 75.82 points he earned from the short program on Saturday, he tallied 242.44 in total to win the Korean Figure Skating Presidential Cup. Despite an injury on his right leg, Cha successfully executed a quadruple salchow, besting rivals Kim Jin-seo and Lee June-hyeong, who finished second and third.

The event over the weekend doubled as a qualifier for the 2016-17 season national team as well as the 2017 Winter Universiade in Kazakhstan and 2017 ISU Four Continents Figure Skating Championships. The latter doubles as a test event for the 2018 PyeongChang Winter Games.

The legacy left by Kim Yuna, a decorated figure in Korean skating with nine golds, including one from the Olympics, is by no means an easy one to fill. But if there’s anyone who can do it, Cha just might be the guy.

Not only is he slowly gaining ground in domestic competitions over older and more experienced skaters, but internationally, he’s won two golds at the ISU Junior Grand Prix this season. Along with the one he earned earlier this month in Germany, Cha was at the top of the podium at the ISU Grand Prix competition in Japan in September, during which he set a world record with 239.47 points and secured a berth in the Junior Grand Prix Final in France slated for Dec. 8 to 11.

All this makes him the first Korean figure skater to take two golds in a single season after Kim Yuna, who accomplished the feat a decade ago. He is also the second male figure skater from Korea to advance to the Grand Prix final.

Just a year and half ago, Cha was struggling on the ice, unable to nail the triple axel (a triple jump with a forward takeoff), let alone a quadruple salchow.

But after he met his current coach, two-time Olympic figure skating silver medalist Brian Orser, his triple axel improved dramatically. Cha has been Orser’s pupil since March last year, and under his tutelage, Cha has added the quadruple salchow, a quadruple jump with a takeoff from the inside back edge of one foot, to his repertoire.

“Triple axel is pretty common for him,” Orser said of Cha in July, according to Yonhap News Agency. “Last year at this time, he was just learning triple axel. Now, it’s pretty consistent. Quadruple salchow is also pretty consistent now. He’s also started landing quadruple toe loops. He gets to train with some pretty amazing quadruple jumpers, and he learns pretty quickly.”

But Cha’s endeavor to raise his competitiveness did not end there. To be able to perform on the international stage, where quadruple jumps are commonly performed, he’s training to hone his skill further, practicing other types of quadruple jumps. If he can boost the success rate and variety of his quadruple jumps, he may well have a shot at taking gold in the coming Junior Grand Prix final as well as at the senior-level competition. Domestically, Cha finished third at the Korean Championships at the senior level in 2015 and again in 2016.

Now after clinching gold at the Korean Figure Skating Presidential Cup, Cha will have to sharpen his skates for the Grand Prix final in December. With two wins from this season, Cha is second in the season standings with 460.01 points, just about two points behind Russia’s Alexander Samarin.

Other than Cha, Alexei Krasnozhon of the United States finished the season third with 438.78 points. Cha and Krasnozhon are the only non-Russian skaters among the six who qualified for the final.

“With the progress he’s making now, he’ll be really one of the guys to compete with,” Orser said “The timing of peaking will be good for him. His age is going to be definitely an advantage [at the Olympics]. The way he’s progressing is really phenomenal. This year, at the junior worlds, he will turn a lot of heads, as he did last year. I think he’ll be poised to do really well at the Olympics.”

While Cha is moving toward the prime of his career, the 14-year-old skater is cautious about making any projections. “I think I am yet to concern myself about [the PyeongChang Olympics],” he said. “The most important competition for me right now is the Junior Grand Prix final. I want to focus just on this event.”

But he’s well aware of the attention he’s getting from Korean watchers of the sport. “If I get to compete in the PyeongChang Winter Olympics, I would like to show a clean performance.”