Goryeo masterpiece is donated to museum

Goryeo masterpiece is donated to museum 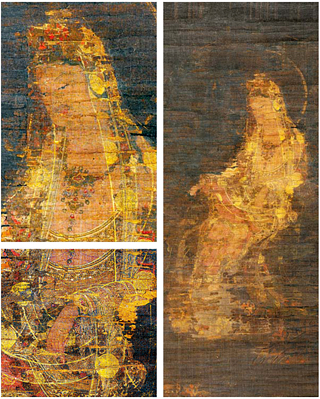 Details of a “Water-moon Avalokiteshvara” painting from the Goryeo Dynasty (918-1392), made in the mid-14th century, which has been donated to the National Museum of Korea by Yoon Dong-han, the CEO of Kolmar Korea, a mid-sized beauty and health care products company. [NATIONAL MUSEUM OF KOREA]

One of the most important paintings in Korean art history has been added to the collection of the National Museum of Korea.

A “Water-moon Avalokiteshvara” painting from the Goryeo Dynasty (918-1392), drawn in the mid-14th century, has been donated to the museum by Yoon Dong-han, CEO of Kolmar Korea, a mid-sized beauty and health care products company, the museum announced Monday.

In Korean art history, there are numerous representations of “Water-moon Avalokiteshvara,” a bodhisattva in a landscape, by different artists from different years.

Until now, there were only five such paintings in Korean museums, including the Leeum, Samsung Museum of Art and Horim Museum. The National Museum of Korea wasn’t one of them.

Around the world, 46 paintings of the scene are known to exist, mostly in Japan, Europe and the U.S. There are only 160 Buddhist paintings from the Goryeo period worldwide.

Of them, the water-moon paintings are considered the apex of the period’s artistry. Some even say they are the most striking of all Buddhist paintings.

Yun, who is interested in history, purchased the painting early this year. Yun said he was told that the previous owner of the painting was a businessman of Korean descent residing in Japan, whom he didn’t meet.

“I visited a museum in France about seven years ago and saw a ‘Water-moon Avalokiteshvara’ painting,” Yun said. “A curator told me there wasn’t one of these paintings in the National Museum of Korea, which I thought was a shame.”

Yun said he decided to donate the painting to share it with the general public. Museum officials noted that the donation of such a priceless artwork takes place only rarely.

Measuring 91 centimeters long (35.8 inches) and 43 centimeters wide, a tad smaller than other versions in Korea, the painting has the standard attributes of the scene, which is described in Avatamsaka Sutra, a Buddhist scripture.

Avalokiteshvara sits on a rocky outcrop surrounded by a sea of waves, dressed in translucent and flowing robes. The boy Sudhana stands at Avalokiteshvara’s feet in a pose of admiration.

The painting donated to the museum, however, is conspicuously dark and such details aren’t readily seen at a glance. “We have to keep in mind that this painting was made 700 years ago,” Jeong Myeong-hee, a curator at the museum, said.

“A scientific test has found that the painting has all the original elements,” she said, adding that the eyebrows and smile of Avalokiteshvara as well as all kinds of prints and patterns on the robes can be found.

Officials added that they found that two rounds of restorations appear to have taken place, but the conservators made no additional drawing or coloring.

They did, however, add a layer of black paper on the back. Getting rid of it, officials noted, would help make the painting brighter.

The painting comes with a wooden case, which has a symbol related to the Tokugawa shogunate of Japan’s Edo period (1603-1868). In it there is a document that contains information about the painting. One line reads that the painting is a treasure from a temple in Aichi Prefecture.

Jeong said further research is needed to discover the relationship the painting had to Tokugawa era and how it ended up in Japan.

The painting, which has never been exhibited in Japan or revealed to the Japanese academia, will be exhibited at the National Museum of Korea from Tuesday until Nov. 13.

After that, conservation work will take place, which could last one year.