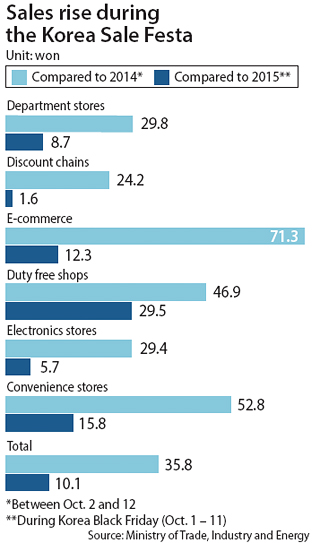 Last week during the Korea Sale Festa, Kim Young-mi, 55, visited the website of an electronics company and laid eyes on a rice cooker that was selling for 47 percent off, at 189,000 won ($165.64). A few hours later, her daughter found the same product sold for less than 160,000 won in an online shopping mall. “If it wasn’t for my daughter, I would have believed the discount price on the official website was the cheapest price I could find,” she said.

Since the national sale ended last week, there have been mixed assessments about the event’s success. The government says the event was successful, temporarily improving consumer sentiment. During the 11-day discount period between Sept. 29 to Oct. 9, companies’ sales jumped approximately 10 percent compared to Korea Black Friday, the national sale held last fall, the government said. “Considering this year’s retreated consumer sentiment, the two-digit year-on-year rate increase is a positive sign,” said an official with the Ministry of Trade, Industry and Energy. “If it wasn’t for the Festa, consumption would have fallen even more.”

However, consumers say the discounts weren’t as big compared to the event’s promotion as the “nation’s biggest shopping festival.” The most frequent comments posted on the Korea Sale Festa’s official website and social media account were cases of products being more expensive in brick-and-mortar stores than on e-commerce sites. “I saw a pair of shoes on 20 percent discount at a department store being sold at 30 percent off in an online shopping mall,” said a 33-year-old consumer surnamed Park.

Among retailers frequented by domestic consumers, online shopping malls posted a larger increase in sales compared to brick-and-mortar stores. While department stores and discount chains each saw sales increases of 8.7 percent and 1.6 percent, sales on e-commerce sites rose 12.3 percent. Large, duty-free shops, used mostly by foreign visitors, showed the sharpest uplift of 29.5 percent. Convenience store sales also rose 15.8 percent year-on-year, but this was largely due to the increase in single and two-member households, instead of Festa itself. “Young people in their 20s and 30s are already pretty familiar with online shopping; there’s high possibility that this age group didn’t feel the need to take advantage of the national sale, as most products on discount were similar or more expensive than when sold on the internet,” said a spokesman for an e-commerce site. The online shopping mall Ticket Monster saw an average 173 percent increase in sales compared to the week before the national sale period.

The price difference between products sold offline and online is inevitable considering the distribution system. E-commerce sites are free from certain burdens that brick-and-mortar stores have no choice but to pay, such as costs for store operation. This enables to them to cut prices. Nevertheless, industry specialists say the discounts at offline stores should have been bigger. “Next year, companies should at least try to lower prices to a similar range of online shopping malls,” said a distribution specialist.

Although the discounts are up to the retailer, the industry insiders have pointers for the government to boost the success of next fall’s national sale. To start off, the government needs to better define the event. This year’s Korea Sale Festa was a combination of retailers’ discounts and cultural festivals. Its official homepage was muddled with information about both.

“Despite the initial intention to create a festival that bonds ‘shopping’ and ‘tourism,’ we seem to have failed this year in creating a synergy between the two,” said an internal spokesman.