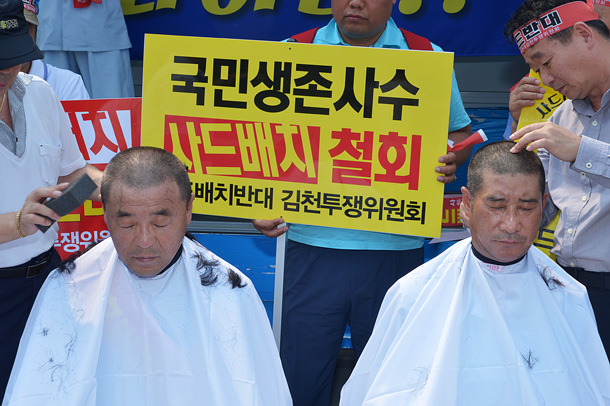 Sixteen Yeouidaebang-ro, Dongjak-gu, Seoul is a winding road on the side of the main entrance of Boramae Park. It is a quiet and peaceful neighborhood with a school and apartments. But lately, the street is noisy and chaotic, protestors rallying and people arguing over X-Band Radar.

The Korea Meteorological Administration located on this street wants to install the X-Band Radar in the building, and the local residents oppose the plan. X-Band Radar is produced by an American company, and it is a device that precisely analyzes meteorological information at an altitude of one kilometer (0.62 miles) and below.

The radar is effective in observing weather phenomenon occurring at a low altitude. The Meteorological Administration is rushing to bring it in after a series of misreports resulted in harsh criticism. But local residents claim that the safety of the electromagnetic wave needs to be verified as the radar uses the same frequency range, 8-12 GHz, as Thaad.

Locals are furious at the unilateral administrative decision. “This is not NIMBY. Just because there is no legal requirement, the government announced the important decision to install radar in the area with schools and apartments. We cannot let it happen,” said a housewife in her 50s.

Persuasion has disappeared in our society. For every controversial issue, one side makes a unilateral announcement, and the other side opposes it strongly, and it does not move a step forward. The Thaad deployment in Seongju golf course, Seoul National University’s Siheung campus and Ewha Women’s University’s Future Life College are all examples of the deadlocked issues.

Students at Ewha Women’s University have occupied the main office for over 80 days, and it started from the university’s unilateral decision to open a continuing education degree program.

A project is announced without consulting the affected parties as opposition would delay the project. But the unilateral announcement brings fiercer opposition, and the project gets even more delayed and adrift. Forcibly pushing for a plan without persuasion and communication only leads to more ambiguous anxiety and stronger opposition.

A negotiation requires persuasion. Persuasion begins from listening and understanding. In a negotiation, parties need to try to understand the position of the other side and why it is acting a certain way. We need to deviate from the practice of emphasizing speed and efficiency.

This social atmosphere hinders Korea from becoming a truly developed and advanced country. We are seeing discords here and there, and the society may explode someday. The more important a plan is, the more time we need to take to persuade and reach a social consensus. Let’s break the vicious cycle of unilateral decisions, announcements, opposition and discord.


*The author is the editor of economic and industrial news at Korea JoongAng Daily.