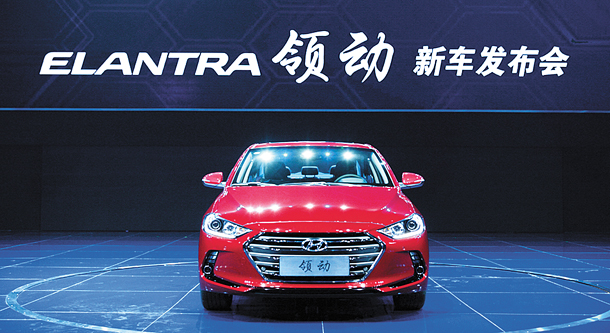 Hyundai Motor is vying for a rebound in the Chinese market with the Lingdong, a local version of the Avante that is receiving a positive response from consumers there. [HYUNDAI MOTOR]

It’s been a rough year for Hyundai Motor Group.

With all these setbacks at home, the group is now banking on the Chinese market to help make up for lost domestic production and sales. However, challenges lie there as well.

Last year, Hyundai Motor and Kia Motors set a global sales target of 8.2 million vehicles but fell short by some 200,000 cars. Poor performance in the Chinese market was largely to blame, as sales of Hyundai and Kia cars in the world’s largest auto market fell by 4.9 percent from 1.7 million in 2014 to 1.6 million in 2015. The two companies’ market share there also fell below 10 percent for the first time in three years, settling at 8.9 percent. 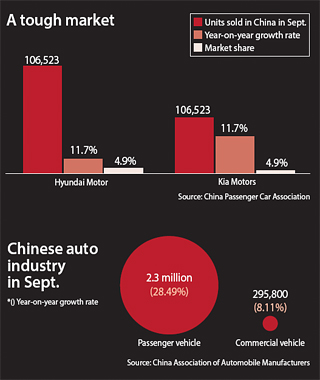 To boost local consumption, the Chinese government at the beginning of this year lowered taxes on purchases of small sedans, resulting in an overall sales jump of 14.4 percent in the first half. But Hyundai and Kia failed to benefit from the eased tax regulations. If anything, their sales in China actually retreated during the first half, from 813,386 units last year to 808,187 this year.

New car models, though, may be the companies’ saving grace for the remainder of 2016. In the third quarter, Hyundai and Kia started to rebound, largely thanks to Hyundai Motor’s new Avante, also known as the Lingdong in China, and Kia Motors’ Sportage sports utility vehicle, marketed there as the KX5. The two automakers’ total sales in China so far up until September are at 1.2 million units, an improvement of 8.7 percent from the same period last year.

September was an especially good month for Hyundai and Kia, as sales of all Hyundai models rose 11.7 percent from last year, totaling 106,253 vehicles, and Kia enjoyed a 30.8 percent year-on-year increase that month with 55,022 units sold.

While things seem to be improving this year, it’s difficult to say that Hyundai Motor and Kia Motors are safely settled in the world’s largest auto market for the long haul.

During the month of September, auto sales in China increased by 26.14 percent, posting the biggest growth rate in nearly four years. However, Hyundai and Kia haven’t been able to catch up in the rapidly growing market. The expanded market size in China has largely come on the back of other carmakers, most notably homegrown Chinese auto companies.

Hyundai Motor and Kia Motors each lost 0.3 and 0.2 percentage points in market share in September.

Still, the Korean automakers are pushing on. Hyundai Motor’s fourth Chinese plant, located in the southern city of Changzhou, is expected to finish construction on Wednesday. The factory will be capable of producing 300,000 vehicles a year. If it goes into full operation, Hyundai Motor will be able to manufacture a total of 1.35 million units locally.

A fifth plant in the southwestern city of Chongqing is expected to be completed next year, but it remains to be seen whether the extended production lines will give the automaker a definite upper hand in the bustling Chinese car market. Some industry insiders have expressed concerns about Hyundai and Kia indiscriminately expanding their production capacity, warning that cheaper Chinese carmakers might have more competitiveness among local consumers.