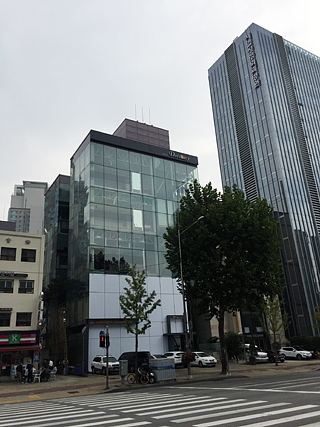 Tesla Motors is expected to open its second showroom for Korea in a building in Cheongdam-dong, 131-11, known as Yeongdongdaero 730 under the new address system, in November at the earliest. [SEO JI-EUN]

Tesla Motors is preparing to open a second showroom in Korea in Gangnam, southern Seoul. Its first will open in the Starfield Hanam shopping mall in Gyeonggi in less than two months.

A lease on three floors of a five-story building in Cheongdam-dong, 131-11, known as Yeongdongdaero 730 under the new address system, was signed by Tesla Motors Korea on Sept. 1. Tesla will rent the building’s basement, first and second floors through Aug. 31, 2021. The rent is 500 million won ($439,059) for the entire period, the document shows.

The landlord is Bora Trading, a Seoul-based importer of Italian food products including the De Cecco pasta brand.

Tesla made it official Sept. 2 that it would open its first Korea showroom in Starfield Hanam, a shopping mall that was opened Sept. 9 by retail giant Shinsegae, by December. The announcement came 10 months after the American electric vehicle pioneer opened an office in Samseong-dong, southern Seoul.

Tesla confirmed its rental in Gangnam.

“We have just registered a building on Yeongdong Boulevard,” said Atsuko Doi, Tesla’s head of communications for Asia Pacific, in an email. She added the company hasn’t “planned in detail how we use it.”

Regarding rumors among auto enthusiasts in Korea that Tesla may choose not to open the showroom in the 212-square-meter (2,281-square-foot) space in Starfield Hanam, she described them as “incorrect.”

When visited on Monday by the Korea JoongAng Daily, the space Tesla has rented from Bora Trading was already under remodeling. Previously an Italian restaurant, the old interior was torn down completely. One of the workers on the scene said they are working on an automobile showroom without elaborating further. The process is expected to be finished in a month, which would indicate it could open in November at the earliest.

There is speculation Tesla will open two showrooms simultaneously. The one in Gangnam will be more symbolic of Tesla’s attempt to be considered a luxury brand.

The building in Gangnam has been optimized to serve as a car showroom. It was established in 2004 by KUZ Plus, which was the official importer of Ferrari and Maserati until 2006. The floors are framed by huge glass windows to display vehicles.

In Asia, the California-based company led by business magnate Elon Musk opened its first showroom in October 2010 in Tokyo's trendy Aoyama district. Now there are three in Japan. Tesla runs 21 stores in China, three in Hong Kong and one in Taiwan, which opened in July.