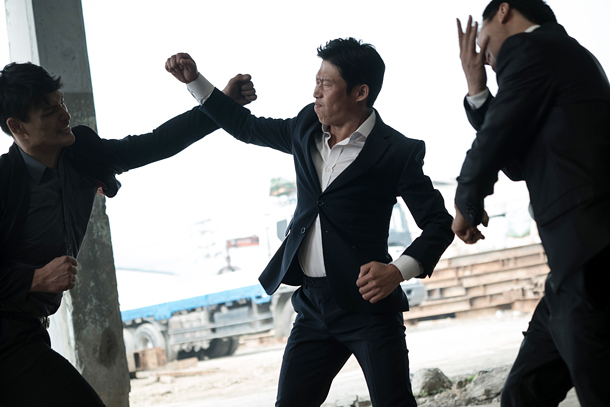 During those three days, the action-comedy sold 694,000 tickets, accounting for 70.8 percent of the weekend’s total movie ticket sales. The movie has sold more than two million tickets in the four days since its debut on Thursday.

Helmed by Lee Gye-byeok, the film is a remake of the Japanese movie “Key of Life.”

The second spot went to 20th Century Fox’s “Miss Peregrine’s Home for Peculiar Children.” Directed by Tim Burton, the latest fantastical oddity sold 102,000 tickets from Friday to Sunday, adding up to 2,490,000 in accumulated ticket sales since its opening in local theaters three weeks ago on Sept. 28.

Starring Eva Green and Asa Butterfield, the fantasy-adventure has been one of Burton’s best-performing films in the last few years.

Horror-thriller “Don’t Breathe,” directed by Fede Alvarez, slipped to the third place from second in its second weekend. Despite being R-rated, the Hollywood film has so far sold 53,600 tickets since its release on Oct. 10.

Starring Jane Levy and Dylan Minnette, the movie revolves around three teenaged thieves breaking into a blind man’s house to rob him only to be attacked back by the war veteran.

Filmmaker James Watkins’ latest action movie “Bastille Day” debuted in the fourth spot in its opening weekend. Since the opening on Thursday, it has sold 70,000 tickets so far.

Featuring Idris Elba as a competent yet reckless CIA agent and Richard Madden as a pickpocket, “Bastille Day” depicts the two men working together to catch terrorists trying to destroy Paris by Bastille Day, the French national day commemorating the start of the French revolution in 1789.

The third installment of Bridget Jones series, “Bridget Jones’s Baby,” grabbed fifth place in the local box office this weekend. The romantic comedy, which is another cliche yet lovely Cinderella story, has so far sold 760,800 tickets since the opening on Sept. 28.

Despite debuting at number one in the North American box office, action-thriller “The Accountant,” starring Ben Affleck, had a sluggish performance at the local box office, reaching sixth place.

The controversial documentary “Spy Nation” came in seventh, and the crime-filled action thriller “Asura: The City of Madness” dropped to eighth place from third last weekend.

“Sully,” starring Tom Hanks and animation “Thomas & Friends: Tale of the Brave” rounded out the box office in ninth and tenth.