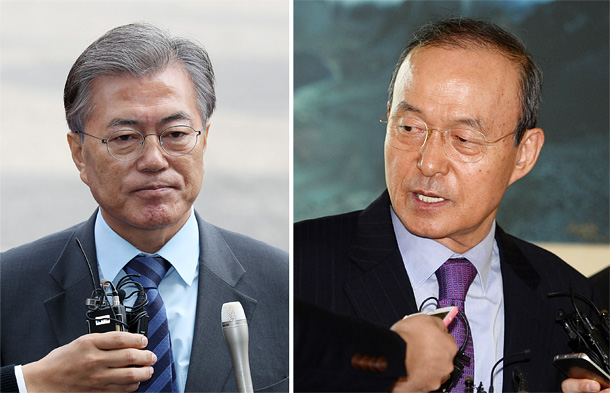 Moon Jae-in, left, faces reporters asking about a controversial memoir at a visit to a company in Incheon on Monday. Song Min-soon, right, receives a barrage of questions from reporters about his memoir when he walks out of the University of North Korean Studies in Seoul on Monday. [NEWSIS]

The Foreign Affairs Ministry was frozen out of the Roh Moo-hyun government’s negotiations to hold a second summit with North Korea in 2007 because the government thought foreign ministry officials would insist on close coordination with Washington, a former top diplomat said in a controversial memoir.

Song Min-soon, former foreign affairs minister in the Roh administration, recalled in his memoir published this month that he had not been aware of Roh’s decision to hold a summit with the Kim Jong-il regime until Aug. 8, 2007 - five days after Roh made up his mind.

According to the memoir, entitled “A Glacier Moves Inevitably,” the veteran diplomat wrote that former National Intelligence Service (NIS) chief Kim Man-bok flew to Pyongyang on July 29 to discuss the summit and the late President Roh agreed to the summit on Aug. 3.

But while the secret diplomatic channel was negotiating, Song said he was kept in the dark until Aug. 8, when the government was forced to announce the summit plan because it was leaked and reported by local media a day before.

“The summit preparation team decided that had I known about efforts to hold the second summit, I would have demanded we closely coordinate with the U.S. in order for the summit to be on the same track with the denuclearization process (in North Korea). They appeared to have concluded that such a demand would weaken momentum for the summit,” said Song in the book.

“It was only on the morning of Aug. 8,” Song wrote, “when I arrived at a Blue House meeting that I learned of the situation (the summit preparation).”

Because Song was in the dark until Aug. 8, Washington was, too. Song called then-Secretary of State Condoleezza Rice to deliver the news on Aug. 8, according to the memoir.

While talking to Secretary Rice, Song recalled being “embarrassed” about not knowing about the summit until that day.

In the book, Song depicted the Roh administration as willing to take inter-Korea relations in a new direction while Washington was firm on the principle that doing so must be in line with Pyongyang’s commitment in denuclearization.

Song, who is now president of the University of North Korean Studies, quoted then-U.S. Ambassador to Korea Alexander Vershbow as saying that Washington was displeased with Seoul for having failed to inform it of the summit earlier.

The revelation by Song sheds light on policy differences between Seoul and Washington in 2007 over the best way to deal with Pyongyang.

The memoir has sparked a political firestorm after Song wrote that Seoul asked Pyongyang’s opinion about a 2007 UN vote on a resolution addressing North Korean human rights. The diplomat’s revelation sparked controversy over why the Seoul government got Pyongyang involved in the vote, in which South Korean eventually abstained.

In the book, Song said Moon Jae-in, then-presidential chief of staff, was the top-level official responsible for asking the North its opinion of the vote via an inter-Korea channel. Song said Moon accepted the proposal floated by NIS chief Kim about asking Pyongyang. Kim has denied the allegation.

With Seoul abstaining, the resolution on North Korean human rights passed 97 to 23 on Nov. 21, 2007. Sixty nations, including South Korea, abstained.

Song’s memoir has had a political impact because dealing with the Communist North has always been a sensitive topic in a country sharply divided along ideological lines.

The Blue House made its first official remark on the controversy Monday, expressing its dismay at what was portrayed in Song’s book.

Blue House spokesman Jung Youn-kuk told reporters during a regular briefing that if the claims are true, they are very “grave, serious and shocking.”

Facing mounting questions, Moon, who ran against President Park Geun-hye in the 2012 presidential race and lost by a slim margin, told reporters Monday that he didn’t recall his position on the matter nine years ago and asked them to refer their questions to people who remember a decision-making process on the vote.

Minjoo lawmakers who served the Roh administration said that Moon, a human rights lawyer-turned-politician, endorsed a yes vote on the UN vote at first, but eventually followed a majority decision to abstain from the vote. Moon could not clarify what his stance was in 2007, saying on Monday he “couldn’t remember.”

“They said I at first sided with the foreign affairs ministry for a yes vote but changed my position in line with a majority,” he told reporters. “But I can’t really remember well.”