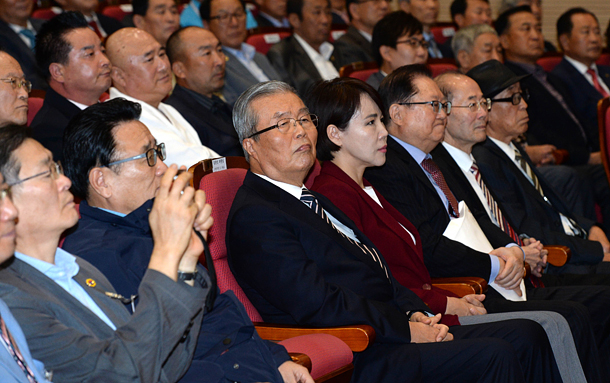 Rep. Kim Chong-in, former leader of the main opposition Minjoo Party of Korea, third from left, attends a forum “A New Road for Korea” hosted by a bipartisan group of lawmakers who seek a constitutional amendment in the National Assembly Members’ Office Building on Monday. [NEWSIS]

Rep. Kim Chong-in, former leader of the main opposition Minjoo Party of Korea, pushed for a constitutional amendment on Monday to introduce a parliamentary cabinet system, presenting a timeline for a referendum next year and a new constitution to take effect before the general election of 2020.

“Since democratization, we ended up with nothing after an elected president ruled the country for five years by operating his or her faction,” Kim said in a lecture hosted by the National Assembly on Monday. “Some might have enjoyed the taste of power by working for an administration, but they never helped this country’s advancement. For Korea to start a new journey, the political system must change so the country can be run based on everyone’s cooperation.”

Kim, a 76-year-old proportional lawmaker of the Minjoo Party, is a political strategist who successfully led the presidential campaign of Park Geun-hye in 2012. After parting with her, he joined the main opposition party, reinvented it and engineered the April 13 general election victory.

Following the general election and subsequent leadership elections, the ruling Saenuri Party is controlled by loyalists of President Park and the main opposition Minjoo Party of Korea is dominated by supporters of the presidential candidate she defeated, Moon Jae-in. Kim is now pushing the idea of finding a new political force outside the two factions, often referred to as a “Third Zone” candidate. A constitutional amendment to introduce a new governing system to replace the current five-year, single-term presidency is a part of the plan.

Kim said Monday that he will aggressively work to amend the constitution after the National Assembly wraps up its audit of the administration on Saturday. As of now, 193 lawmakers are participating in a group inside the legislature that supports amending the constitution. Kim believes it will have more than 200 members once the audit ends. A constitutional amendment requires the support of at least two thirds of the 300-member National Assembly.

Kim and Minjoo Rep. Won Hye-young, a leader of the group, will ask National Assembly Speaker Chung Sye-kyun and the ruling and opposition parties to launch a special committee on a constitutional amendment.

Kim said a national referendum to introduce the parliamentary system must take place next year.

“Presidential candidates may promise a constitutional amendment, but they can still recant their words after the election,” he said. “So we must hold the referendum before the end of next year. “Because a constitutional amendment is only possible by guaranteeing the tenure of the current lawmakers, the new constitution should go into force in time with the 2020 general election,” he said. He also said the next president’s term should be shortened to two years and three months.

“By next year, we will have no choice but to amend the constitution,” Kim said, adding that many presidential contenders including UN Secretary-general Ban Ki-moon will likely support the idea. The only exception, Kim said, will be Moon.

He also says Park, who adamantly opposes the amendment, will eventually agree.

“If Park aggressively promotes it, that is actually a negative,” said a Kim associate.

“Pay close attention to the next moves by Park loyalists.”