Jeonbuk and Seoul face off in ACL’s East Zone semifinal

Jeonbuk and Seoul face off in ACL’s East Zone semifinal 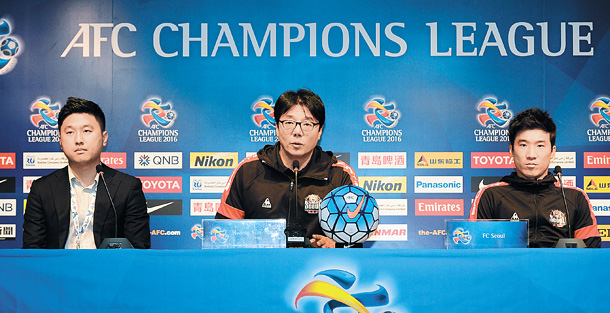 FC Seoul manager Hwang Sun-hong, middle, speaks during the pre-match press conference on Tuesday. The skipper said while Seoul’s chance to advance to the next stage is slim, his team will leave everything on the field during today’s match. [NEWSIS]

The moment of truth is finally here.

The East Zone semifinal at this year’s Asian Champions League (ACL), an annual continental cup that decides the best football club in Asia, is an all-Korean affair, with two K-League teams, Jeonbuk Hyundai Motors and FC Seoul, making their way to the final round of the knockout stage by taking down big-spending Chinese clubs in the quarters.

With Jeonbuk enjoying the upper-hand after taking the first-leg match with a 4-1 win over Seoul, the fate of the two teams at the ACL will be decided in the second-leg match of the semis today at Seoul World Cup Stadium.

In the first-leg match on Sept. 28 at Jeonbuk’s Jeonju World Cup Stadium, the hosts emerged with a victory in the scintillating game. Jeonbuk’s 1.97 meters (6 foot 5) target man, Kim Shin-wook, played a starring role for the club, drilling home a shot that extended Jeonbuk’s lead to three goals towards the end of the game. The lanky forward also contributed to earlier goals, drawing out a penalty that gave Jeonbuk the opening goal as well as an assist before half time. In tribute to his performance, the Korean international was selected as the Toyota Player of the Week for the semi-final first leg of the ACL. It is highly likely that Kim will assume the target man role for his manager, Choi Kang-hee, once more today.

“We’ve defeated Seoul four times this season,” said Choi during the pre-match press conference on Tuesday. “Our players are confident going into the match. But they are not over-confident to blow the win. We have the upper-hand in virtually every aspect of the game.”

While Jeonbuk goes into today’s match with some room to breathe, Seoul has much to do in order to salvage itself. Leading the series 4-1, the Jeonju-based club will advance to the finals if they manage to come out of today’s game without conceding more than four goals. Otherwise, a three-goal margin defeat would force the series into overtime. The total number of goals scored throughout the two legs will decide the winner of the series, with the advantage given to the team that scored more goals in the away match.

The first game was rather a disaster for Seoul. With Carlos Adriano and Dejan Damjanovic keeping silent up front, Seoul could not make any notable plays there. Ju Se-jong, a midfielder, took the wheel and scored the lone goal for Seoul but his effort was for naught as no other players were able to find the back of the net.

“You don’t know how the 90-minute match will turn out at the end and this is football.” said Seoul’s skipper, Hwang Sun-hong at the press conference. “I believe we have a 1 percent chance [to advace to the finals] and we will go until the end, leave everything we have out there.”

Indeed, while Seoul’s chance for further advancement looks bleak, Hwang still has someone to count on - the Brazilian forward and leading scorer for the ACL, Adriano.

While Adriano remained hushed during the first match, the import from Brazil is still one of the most lethal scorers in Asia, netting 12 goals in the ACL and 14 in the K-League this year. Often when Seoul was in a pinch, it was Adriano’s foot that knocked Seoul forward. The bottom line is, if Adriano gets his motor running tonight, Seoul may have a shot at finishing tonight’s regulation with more than a three-goal margin, as improbable as it seems.