LG Twins players show their gratitude to fans at Jamsil Stadium on Monday after clinching a comeback win over the Nexen Heroes. [NEWSIS]

The LG Twins have prevailed again.

During the fourth game of the second round in this year’s postseason at the Korea Baseball Organization (KBO) Monday, the Twins rallied to take down the Nexen Heroes 5-4, ending the series to advance to the next stage.

In a game that saw no homer throughout the entire nine innings, it was the Twins that outhit the Heroes 13 to six. The designated hitter, Park Yong-taik, and third baseman, Luiz Jimenez, did their share by going 2-for-4 and 2-for-5 at bat. But at the end of the day, it was the heroics of shortstop Oh Ji-hwan that shined brightest.

Oh’s bat not only put the Twins on the scoreboard, but ended the game and gave the win to the team and their fans in Jamsil Stadium, the home of the Twins. 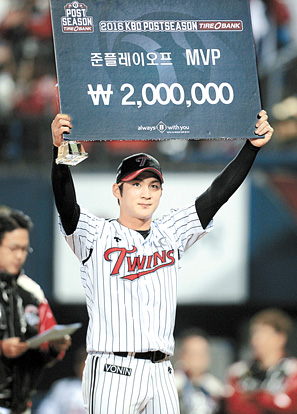 LG Twins shortstop Oh Ji-hwan holds up a placard he received for being named the MVP of the series against the Nexen Heroes on Monday. [NEWSIS]

Oh is considered one of the talents to continue the legacy of slugging shortstop Kang Jung-ho, a former Heroes man who slugged 21 home runs this season for the Pittsburgh Pirates in the Major League Baseball, and he seems right on track, having had a solid postseason. Oh made some errors on the field but also had a number of spectacular plays, including those on Monday night.

In the second inning, the Twins shortstop made a fatal mistake on defense, which gave a run to the Heroes and, it seemed, lost his team the momentum of the game.

The Heroes were in the lead after Lee Taek-keun tallied a run worth a run batted in (RBI). After Lee, Park Dong-won came to the plate and sent the ball bouncing to the left field. Oh tried to socket the ball but it bounced off his glove into the foul zone. The error allowed Kim Min-sung to drive home from second base and by the end of the inning, the Twins had given up four runs and Ryu Jae-guk stepped down from the mound, relieved by Lee Dong-hyun.

But Oh made up for the mistake in the subsequent innings.

At the bottom of the third, he cranked an RBI-single to the center and narrowed the deficit to a three-run margin. The Twins tallied one more run before wrapping up the inning. Adding two more on the scoreboard in the fifth, Oh’s bat fired once more in the eighth and delivered the win. With runners on first and second, Oh came in and belted a double to the right, which Lee Chun-woong capitalized on and drove home.

“This feels great, and I’ve never experienced anything quite like it,” Oh said in his post-game press conference, according to Yonhap News Agency. “Playing the shortstop position can have its ups and downs. And before the postseason, I felt the pressure not to make mistakes. But I figured even if I make errors, I could always compensate for them with my bat, and I believed I would get my chances.”

Ushering in two runs total on Monday, Oh went 4-for-5 for the day with two RBIs, including a go-ahead hit, to become the Most Valuable Player of the entire series.

Now that the Twins have come this far, it is time to travel down to Changwon, South Gyeongsang, to meet the NC Dinos, who finished the regular season second in the league and earned the bye.

As one die-hard fan of the Twins said after the game, it is time for the Twins to meet the dinosaur before going on a bear hunt. But do they have what it takes to face the Doosan Bears for the Jamsil Derby? Fans will find out soon enough in the series, which kicks off this Friday. The next round of the postseason will be played as a best-of-five series.