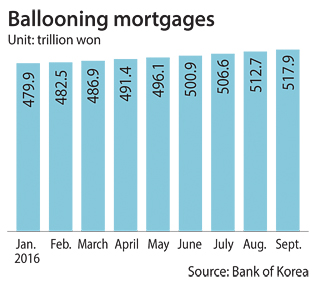 Yim Jong-yong, Financial Services Commission (FSC) chairman, said the government will continue to provide so-called Bogeumjari loans even if the criteria are tightened.

“Apartments [with values] of less than 300 million won ($265,000) account for 56 percent [of all apartments in Seoul],” Yim said during the National Assembly audit on Tuesday.

The FSC Chairman’s comment was meant to ease confusion that started with the Korea Housing Finance Corporation’s decision late Friday to temporarily tighten the eligibility criteria for the Bogeumjari loan, which were first adopted in the mid-2000s to provide long-term mortgages to lower income households.

The mortgages are at a fixed interest rate with a maturity from 10 to 30 years. They are reserved for borrowers who do not own a residence or are planning to sell one within the first three years of the loan.

The FSC chairman stressed that tightening of the eligibility criteria is aimed at upholding the program, as it will prevent potential borrowers from becoming too highly leveraged.

The decision by the state-run housing corporation caused confusion and even some panic among potential homebuyers and some financial institutions.

A post uploaded on the Korea Housing Finance Corporation website described a person who signed a contract to buy an apartment earlier this month after consulting with a bank that confirmed he was eligible for a Bogeumjari loan.

But when he called back on Monday, it told him he was no longer eligible for the loan.

The changes were announced after 6 p.m. on Friday, leading to complaints from the financial institutions that actually lend the money for the government-backed loans.

“The sudden announcement of changes without prior discussion will only create problems and confusion in the field,” said a banker, who requested anonymity.

The government’s sudden move was an effort to curbing the rapidly rising amount of mortgages be taken out. Korea’s total household debt, which includes credit card debt, is expected to exceed 1,300 trillion won by the end of the year.

The financial authorities have been increasing pressure on commercial banks to tighten lending criteria across the board.

Industry insiders said that major commercial banks, including KB Kookmin, Shinhan and KEB Hana have either scaled down or exhausted their so-called conforming mortgage allocations for this year.

Conforming mortgages have fixed interest rates and other conditions.

“Korea Housing Finance Corporation allocates every year the amount banks can lend as conforming loan to homebuyers,” said a source at KB Kookmin Bank. “We used up the yearly amount by mid-September. The state-run housing corporation sometimes gives us extra room to expand the yearly allocation depending on economic conditions and market liquidity but we’ve heard nothing so far.”

Starting in October, the Korea Housing and Urban Guarantee Corporation, which guarantees mortgages, has limited its loan guarantee ratio from 100 percent to 90 percent. The reduced guarantee means that the banks assume more risks, an effect that the government hopes translates into stricter evaluations of potential borrowers. The interest rate for mortgages is also on the rise.

According to the Bank of Korea, the average interest rate for mortgages was 2.7 percent in August, up 0.04 percentage point compared to the previous month.

That was the first increase in eight months.

Chairman Yim has warned those lending above a certain level.

“Banks should make sure that their lending this year is in line with the yearly target they set earlier,” Yim said last week. “The Financial Supervisory Service will also start special monitoring to the banks if the lending growth is too high.”

Revitalizing the real estate market, which has been flat since the global crisis of late 2008, has been one of the key agenda of the Park Geun-hye administration.

The real estate market started to show signs of strong recovery in recent months fueled by the approval of redevelopment of residential complexes in the popular Gangnam districts in southern Seoul, including The H Honor Hills in Gaepo-dong.

According to a Ministry of Land, Infrastructure and Transport report released on Tuesday, housing transactions in September rose 6.3 percent year-on-year to over 91,600 units.