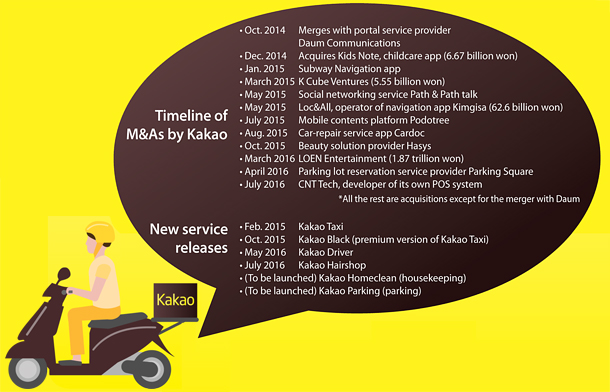 Kakao, renowned for its popular chat app KakaoTalk, plans to expand the scope of its business and jump into the food delivery sector.

Kakao has nearly completed preparation to launch a food delivery service by January next year,” a source from the retail industry familiar with Kakao said on Monday. “As far as I know, the service will be added as part of existing KakaoTalk’s functions.”

Among four menu buttons displayed on the chat app, the button on the far right leads to a list of additional services other than mobile chats, such as sending gifts or making salon reservation. The new delivery service will be added to that menu pool, according to the source.

Other sources from the IT industry also reported that Kakao visited an already established online-to-offline food delivery service company earlier in the year to discuss the new business plan. Online-to-offline services enable customers to access services on-demand by ordering online via mobile devices and receiving the services offline.

“The delivered foods will mostly be products from franchise restaurants,” a Kakao spokesperson said. “A more detailed business format, whether to put it as an additional function under the chat app’s menu or to find a more convenient alternative has not been confirmed yet.”

Another source from Kakao said, “Consumers will only have to text through KakaoTalk to place an order rather than calling the restaurant.”

Kakao has been preparing to enter the delivery business since the first half of this year. Its investment in July to acquire a 20 percent stake of CNT Tech, a developer of its own order receiving platform for more than 80 franchise restaurant brands in Korea, was seen as a strategic move aligned with the company’s plan.

CNT Tech has 90 percent of market share in the ordering platform sector. Once customers order food through a franchise’s key number or homepage, the start-up connects orders to stores nearest customers and transfers order data to the designated stores’ point-of-sales system.

However, the on-demand service giant’s strides are not too welcomed by smaller rivals in the food delivery sector. While on-demand service has been a hot keyword in the business world that could greatly enhance everyday lives of each consumer, there are only a number of sectors that managed to make enough profits and the most successful has been food delivery. Other than that, on-demand accommodation reservation apps Yanolja or Yeogi-Eoddae and real-estate app Jikbang are some that have maintained stable businesses according to industry assessments.

“Considering Kakao is not pioneering into the on-demand food delivery service and rather jumping into the market already established by the painstaking efforts of several start-ups with massive capital, there can be controversies to the company’s move,” a source from IT industry said.

Currently, the food delivery market is already a brutal battlefield of Baedal Minjok, Yogiyo and Baedaltong, earlier movers into the business. While their names are now well-recognized in the sector and each have grown into a sizable business, they are still faced with operating losses. Baedal Minjok, which has the highest market share of more than 50 percent, is the only start-up that has turned around its business from losses in the first half of this year.

During the course of its business, Baedal Minjok had suffered from criticisms that it receives commission from small business operators such as Chinese restaurants operating in a village. It abolished the 6.25 percent commission it used to take from restaurant owners and took on the losses to its own business. Yogiyo and Baedaltong have also operated under the zero-commission rule. However, now the zero-commission has finally resulted in market expansion, giving the existing delivery services a chance to operate without a deficit.

However, this is when Kakao steps in.

Industry sources say that Kakao aims to overcome business uncertainties of its existing range of on-demand services by entering into more established and stable on-demand business sector. The app provider’s planned Kakao Parking service has been accused of copying a start-up’s technology, while the already released Kakao Hairshop, a beauty salon reservation platform, and Kakao Farmer, which connects farmers directly with customers, have not yet found stable business.

“Kakao’s headache stems from the fact that its less profitable business models are highly appraised by the market while the businesses it launched to reap in profits are failing and involved in controversies,” the IT source said. In fact, the free chat app KakaoTalk and Kakao Taxi, which brings in a tiny profit, are the only businesses proving to be successful.

“A company as innovative as Kakao should devote its efforts into expanding the overall online-to-offline market by developing a new technology,” a source from a start-up said. “It is not healthy for the online-to-offline business environment for a company like [Kakao] to jump into an industry where competitors have to divide commission profits rather than innovating in the market.”

“Through our Kakao Taxi service, the annual income of taxi drivers rose by over 3 million won ($2,650),” said Lee Su-jin, head of communications at Kakao. “The major issue regarding online-to-offline service is whether it adds value both to each individual service providers like the taxi drivers and to customers. Our new on-demand service will also be launched under the same business perspective.”