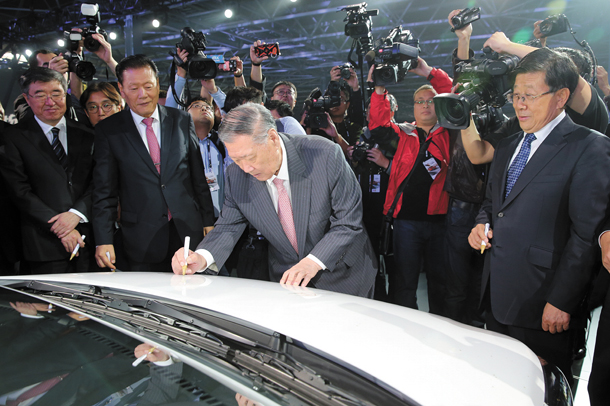 “Since it was founded in 2002, the accumulated sold units surpassed 8 million as of August. With the operation of Changzhou plant, Hyundai Motor Group now possesses product capacity of 2.4 million units per year with eight factories,” he said.

The automaker operates four plants - three in Beijing and one in Changzhou - and its sister company Kia Motors operates three in Yancheng. Hyundai Motor operates another plant for commercial vehicles in Sichuan.

Hyundai also said it will bolster the so-called green-car field. Environmentally friendly cars have been showing an average of 110 percent growth every year in China since 2012. In 2010, there were 5,000 green cars registered in China, and the number jumped to 231,000 units last year. Hyundai said it will release nine new green car models by 2020, which are expected to comprise 10 percent of its vehicle sales in China.

Sports-utility vehicles are globally popular and China is no exception. Hyundai and Kia are trying to capitalize on SUVs’ popularity by fortifying its nine current models including flagship Tucson and Sportage (known in China as KX5).

In China’s auto market, SUVs made up 38.3 percent of all car demand as of August. Hyundai and Kia are planning to release a China-only SUV model as early as next year.

In China on Tuesday, Hyundai Motor also unveiled the compact sedan Verna, which is topped with high-tech functions such as Apple CarPlay that connects Apple gadgets with the vehicle, and H-Band, which allows a driver to operate the doors as well as start the engine with a remote control. This will be first car to be produced at the new Changzhou plant.

“Taking advantage of the new car effect, Hyundai Motor is going to roll out diverse, interactive marketing plans to reach young consumers,” the company said in a statement.