Drama of ballet excites in ‘Romeo and Juliet’

Drama of ballet excites in ‘Romeo and Juliet’ 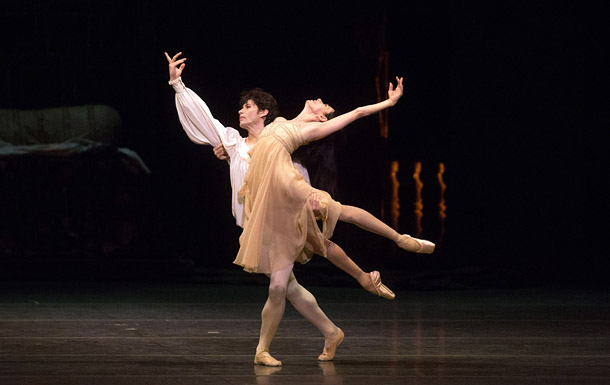 Kenneth MacMillan’s version of “Romeo and Juliet” will be presented by the Universal Ballet starting Saturday. Alessandra Ferri and Herman Cornejo, above, will appear in two of the show’s eight performances. [ROSALIE O CONNOR]

Those who find it difficult to watch classical ballet with dancers twirling about in tutus in endless ballroom scenes or get antsy watching contemporary ballet performances where the dancers’ slow movements are difficult to understand - don’t give up.

There’s also the drama ballet, where ballet movements are used to serve the story, like the upcoming performance of Kenneth MacMillan’s “Romeo and Juliet.” From Saturday, Universal Ballet will be staging this famous drama ballet at the Seoul Arts Center in southern Seoul for a week.

For the performance, world renowned Italian prima ballerina Alessandra Ferri, 53, who is known as one of MacMillan’s muses, will be performing as the teenage Juliet, which is her most famous role.

“I’ve been very lucky because I worked with MacMillan from the first day when I did my first Juliet at the Royal Ballet,” she said. “I was only about 19 years old and I learned a lot from him and everyone else in the company.”

According to Ferri, MacMillan’s “Romeo and Juliet” is a drama ballet that is realistic and faithful to Shakespeare’s original story.

“When I was doing my first Juliet at the Royal Ballet, all the dancers were approaching it really like a theater piece, where dance only serves the story all the time. Everyone was very much involved and alive,” she said. “It was all about being able to tell this Shakespeare story.”

Universal Ballet premiered the show in 2012, but back then, all the stage setting, props and costumes were borrowed from the English National Ballet. This time, the company decided to include it to its repertoire and produced it on its own.

“These days, many Korean dancers focus on the techniques like doing high jumps and twirls but above all that, they should learn to be a real artist on stage,” added Julia Moon, general director of Universal Ballet. “And I wanted to show that through Ferri and Herman Cornejo, the principal dancer of American Ballet Theatre, who will be partnering with her as Romeo.”


Macmillan’s version of “Romeo and Juliet” will be staged eight times from Saturday to Oct. 29 at the Seoul Arts Center. Ferri and Cornejo will be appearing on Sunday and Wednesday. For schedules and more information, visit www.universalballet.com