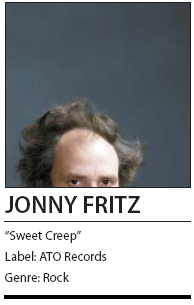 Jonny Fritz left Nashville, he said, because it “had gotten too LA for me.” So naturally he went to Los Angeles.

That’s the kind of offbeat logic we’ve come to expect from Fritz, whose campy brand of country makes his live shows among the most entertaining on either coast or in between. With his new album, “Sweet Creep,” he offers more of the smarty-pants stylings he delivered on “Dad Country,” and takes listeners on another wild ride.

It should be noted that his recordings don’t rival the frenetic fun of a Fritz concert, but that’s a high bar. With “Sweet Creep,” what you get are well-crafted songs recorded outdoors over a three-day period under a tent bought at Home Depot.

For all of his ability to laugh at himself, Fritz knows how to put a good song together. He sings with a voice reminiscent of Nashville Skyline-era Bob Dylan or Roger Miller, whose brand of humor lurks in his work as well. The passing lane, he sings, is where he wants to be.

And even if he’s weaving a little, with Fritz it’s always an entertaining journey.