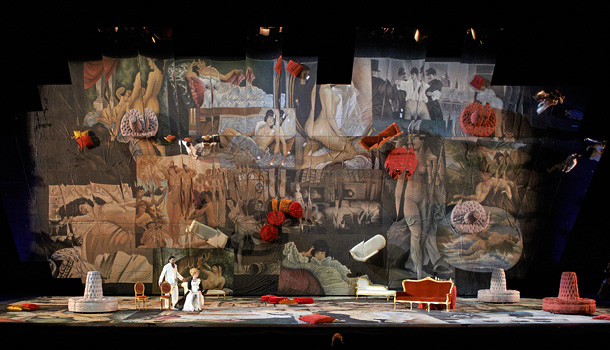 A scene of Henning Brockhaus’ version of “La Traviata.” For his unique staging, backdrops are rolled on the floor and reflected in an angled stage-to-ceiling mirror. [KOREA OPERA GROUP]

Italian composer Giuseppe Verdi’s opera “La Traviata” is known for its glamorous and ritzy staging of the 19th century. Famous German director Henning Brockhaus’ version of “La Traviata” which premiered in 1992 at the Arena Sferisterio di Macerata in Italy, and has been touring the world ever since, is making its premiere in Seoul next month at the Sejong Center for the Performing Arts in central Seoul. But when the curtain rolls up for this production of the “most-loved opera in the world,” Korean audiences may be dumbfounded by a pitch black, empty stage, without any ornaments or furniture of the Belle Epoque era.

There’s only a large mirror lying face down across the entirety of the stage. But soon, this massive rectangular mirror that’s 22 meters (24 yards) in length and 12 meters in height, gets lifted and stops at an angle of about 50 degrees, doubling the ritzy stage that is created in the reflection.

“The use of the mirror extends the vision that’s limited in the auditorium,” said Brockhaus during a press conference at the Sejong Center for the Performing Arts on Monday. “When this premiered in Italy’s Arena Sferisterio di Macerata in 1992, it shocked the audience members as there were no reviews or previews of the performance and they came to the performance with no information,” he added, explaining that the upcoming performances will also be a surprise to the Korean audiences as it’s the first time that they are staging “this kind of ‘La Traviata’ here.”

That is why the Korean producers, the Korea Opera Group and the Sejong Center for the Performing Arts, decided to add a subtitle “The New Way” to this familiar opera piece for Koreans. 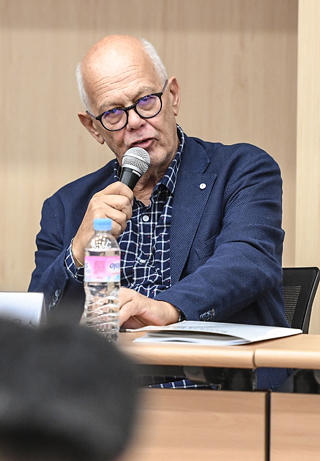 “As ‘La Traviata’ is often referred to as the most-loved opera piece in the world, it’s also very familiar to Koreans,” said Park Ki-hyun, president and general artistic director of the Korea Opera Group. “But it will be a whole new opera for Koreans as this kind of staging is quite unprecedented in Korea.”

Close to Act Three, the mirror gets slowly pushed back to angle 90 degrees with the floor, reflecting the seated audience as well.

“The audience is portrayed on the reflected mirror as voyeurs, peering into what’s happening on the stage behind the curtain,” said Brockhaus. “It gives them the feeling that they are seeing something they are not supposed to see.”

Brockhaus, who was a former clarinet player, decided to take up directing opera after meeting the famous Italian opera and theatre director Giorgio Strehler (1921-97). While working as his assistant, Brockhaus said he met Czech artist and scenic designer Svoboda and they worked together closely for the opera “Faust.” After that, they worked together on numerous opera pieces in renowned venues such as “Mission” in the Il Teatro di Haifa, and “MacBeth” and “The Lady from the Sea” at the Teatro dell’Argentina di Roma. Their great compatibility as partners became quite well known in the opera world, as the two were asked by the Arena Sferisterio di Macerata to create “La Traviata” together.

Although it’s a familiar opera, Brockhaus said it’s important to reinterpret it in different ways so that it continues to be fresh to regular theatergoers across the world while allowing the experience of going to an opera to be as easy as “going to a museum.”