Former Saenuri chief: ‘I won’t be a kingmaker this time’

Former Saenuri chief: ‘I won’t be a kingmaker this time’ 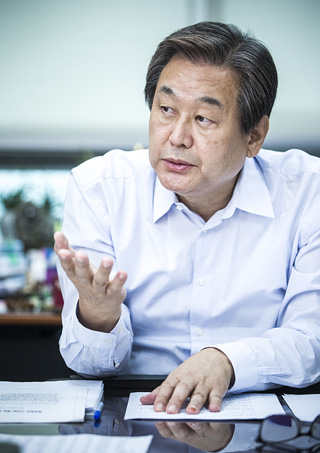 Kim Moo-sung, a former chairman of the ruling Saenuri Party, sat down with the JoongAng Ilbo on Sept. 28 at the National Assembly Member’s Office Building in Yeongdeungpo District, western Seoul. Kim hinted at the possibility of his running for president, as he refuses to be a kingmaker for the upcoming election. When asked about recent attempts to amend the constitution, Kim agreed with the necessity of the amendment and said he hopes to shorten the next presidential term to match with lawmakers’ terms.


Q. Many point out that the National Assembly came to a halt after it passed a motion to recommend the dismissal of Agriculture Minister Kim Jae-soo. What is your view on this?

A. National Assembly Speaker Chung Sye-kyun should lead the assembly with responsibility, which would mean apologizing and promising not to let something like this happen again. That’s politics.


How was your trip to Mount Paektu?

Mount Paektu is an important place for Koreans, so I went there to prepare myself for a big event in my life. I visited Mount Paektu 20 years ago as a newly elected lawmaker. Weather conditions at the time didn’t allow me to see much. But this time the weather was nice, and I didn’t realize two hours passed by as I enjoyed the scenery.


By ‘big event’ do you mean running for the president? Do you plan to announce your candidacy?

It’s too early to announce anything. I haven’t decided yet.
Many say that you’ll be a kingmaker rather than a candidate yourself.
I won’t be a kingmaker this time.


What do you think of the latest push to amend the constitution?

The best scenario I can imagine is for President Park Geun-hye to take the lead in amending the constitution, admitting that she hasn’t been able to carry out major economic policies because of the opposition parties’ objection, and acknowledge that Korea needs a system where two-party confrontation is less severe.


But President Park opposes the idea and even called it a ‘black hole.’

President Park was for the amendment in the past, but I think she’s being careful because everything she pursues is challenged by the opposition parties. In my opinion, there’s nothing more important than the amendment of the constitution, not even labor reform plans or economic legislation.


Have you thought about pledging the amendment for the presidential election?

If President Park fails to amend the constitution, then the next candidates need to pledge to do so. If I get a chance to run, I will promise to amend the constitution and shorten my term to two years and six months, the same as the term for National Assembly members. With the current system, the president can’t do anything, not even when she is given 10 years.


Do you suggest introducing a semi-presidential system in Korea?

The issue is not about implementing a parliamentary system or semi-presidential system, but about building a system that distributes power. Focusing too much attention on choosing the system will only lead to conflict between the parties. What we need instead is to disperse the so called ‘absolute’ power of the president and build a coalition without severe two-party conflict. Former President Kim Dae-jung and former Prime Minister Kim Jong-pil formed a coalition, despite their political alliances. President Park Geun-hye is rejecting everything from the Lee Myung-bak administration, but coalition is what makes long-term policies possible.


What do you think are the challenges of our time?

Social gaps are increasing more than ever, and Korea has entered the era of anger. There needs to be countermeasures against social gaps that make the rich get richer and let large corporations expand without limit.


What kind of leadership do we need to face such challenges of our time?

It’s important for a leader to pay attention to social injustice and communicate. I’m confident I can do both. A leader should never have a selfish motive.

I didn’t recommend a single proportional representative during the last general election. Some members of the party, who I had worked with, say they felt betrayed, but I kept my promise with the public not to use my nomination right.

Candidates must be decided according to the Constitution and party rules. There’s nothing wrong with implementing Superstar K-methods, but changing the rules is unacceptable.

Personally, I’m close to Ban and respect him as a friend. I think we should let Ban finish his term because connecting him to Korean politics only negatively influences his reputation as UN secretary general.


How about Moon Jae-in?

He’s most likely to be decided as a candidate for the Minjoo Party. I don’t agree with Moon’s political opinions, but I do respect him. I never turned around and said bad things about him.


You were favored as a presidential candidate before your nominations negatively affected the campaign. Do you have any regrets?

I topped support polls for the election for more than 30 weeks, only to lose all support before the actual election. But I don’t have regrets because (the open primary) was decided as a party platform. I was harshly criticized (by loyalists of President Park), but the Saenuri Party has a collective leadership system, and I didn’t have much choice. But to clarify, 87.53 percent of local constituencies carried out elections at the time.


Do you expect your support rate to increase?

A lot of President Park’s supporters used to be my supporters, but I have lost them as they questioned my relationship with the president. It’s something I need to overcome if I decide to join the election.