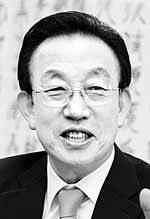 Kim Kwan-yong, governor of North Gyeongsang, emphasized that for the sake of national security it is time to put aside differences over the deployment of the U.S.-led Terminal High Altitude Area Defense (Thaad) system in his province.

“There is no greater priority than the security of the country,” said Kim in a press conference at the provincial government complex Tuesday. “North Korea’s nuclear and missile program is not simply empty threats or for negotiation purposes, but a clear and substantive threat that can drive our people to destruction.”

He continued, “Yet continuing to oppose the minimum defense system, Thaad, without an alternative, only hurts national security.”

Seoul and Washington jointly announced the decision to deploy the Thaad system to Korea on July 8. The Seongsan artillery base in Seongju County, North Gyeongsang, was initially chosen by the government as the location to place the battery, but the government was forced to review an alternate site after strong protests from residents around that area. Seongju residents were especially concerned over risks to health and agricultural produce by the electromagnetic radiation produced by the Thaad’s powerful AN/TPY-2 radar.

The Ministry of National Defense finally decided upon Lotte Skyhill Seongju Country Club as the new location for the Thaad battery on Sept. 30, but residents of Gimcheon, about 8 kilometers (5 miles) from the golf course, fiercely challenged the new site selection. Gimcheon has a population of 13,000 people.

“I believe that the people of Gimcheon and Seongju County, even in the midst of their outcry, hold the same love for our country,” said Kim at the press conference. “Now is the time to employ cold rationality to gather wisdom to protect our country.”

Kim added, “I will make sure Thaad doesn’t become a hurdle for the region’s development - rather, we will make it an opportunity for us to leap ahead. To this end, if there is something we need to request of the government, we will boldly request it.”

Gimcheon Mayor Park Bo-saeng, who went on a hunger strike to protest the new Thaad site, and Kim Hang-gon, head of Seongju County, were also initially scheduled to take part in the press conference but did not participate as they needed more time to listen to the opinions of residents who are opposed to Thaad’s deployment.