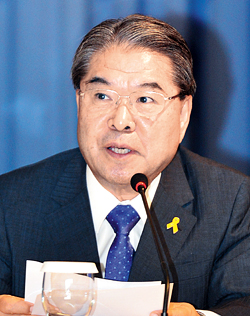 A former unification minister denied Tuesday that Seoul had asked Pyongyang how to vote on a 2007 UN resolution on human rights in North Korea.

The South Korean government merely used an inter-Korea channel managed by the intelligence service to notify Pyongyang that it intended to abstain from the vote, Lee Jae-jung, unification minister at the time of the vote, told the JoongAng Ilbo.

Lee, who served the Roh Moo-hyun government as point man on North Korea and is now head of the Gyeonggi education office, was refuting a claim in a memoir published this month by a former top diplomat that the Roh government asked Pyongyang how to vote.

According to Lee, Roh made up his mind to abstain from the vote on Nov. 17 and the National Intelligence Service (NIS) notified the North of the decision the following day. The vote in New York took place on Nov. 21, 2007.

“The NIS was in charge of delivering the message to the North. There was no reason for a delay (in conveying the message),” said the former minister. Lee said the NIS informed the North of the government’s decision immediately after a meeting by presidential officials involved in the decision on Nov. 18.

Lee’s account of what happened in the days leading up to the UN vote contradicts that of Song Min-soon, foreign affairs minister at the time, in his book “A Glacier Moves Inevitably.”

Song’s account has sparked a torrent of criticism from the conservative bloc, namely the governing Saenuri lawmakers, with Saenuri Chairman Lee Jung-hyun calling the alleged action “secret collusion” with an enemy state.

In the memoir, Song said then-NIS chief Kim Man-bok first floated the idea of asking Pyongyang about the vote and Presidential chief of staff Moon Jae-in accepted it.

Lee’s position is in line with accounts of other officials who served in the Roh government. Rep. Kim Kyoung-soo of the Minjoo Party, who was a presidential speechwriter, said the Roh government had simply informed the North of its decision to abstain from the vote. During an interview with MBC radio Tuesday, Kim said while the late President Roh made his decision on Nov.16, he waited five days to officially announce the decision because of Song’s persistent objection to it.

Moon Jae-in, former chairman of the Minjoo Party, brushed off criticism from the Saenuri Party and called the attacks “outdated ideological offensives.” He told reporters Tuesday that the controversy over the 2007 vote was meant to discredit him because he leads in polls for next year’s presidential race. Moon has yet to clarify whether he accepted former NIS chief Kim’s proposal to ask Pyongyang about the vote. He said he couldn’t recall what his position was nine years ago.

Song’s memoir has the potential of portraying former top Roh government officials as too accommodating - or even coddling - to North Korea under the Sunshine policy of engaging Pyongyang.

Conservatives blame the two liberal governments of Presidents Kim Dae-jung and Roh for the North’s progress in making nuclear weapons, claiming cash sent to Pyongyang in the name of inter-Korean cooperation financed its weapons program. Liberals rebuff the argument, arguing it was the hard-line stance taken by the Park Geun-hye government and her predecessor that has pushed the North into a corner and left it little choice but to hold onto its nuclear option.

During the 2012 presidential race, the Park Geun-hye campaign attacked the Moon Jae-in camp by contending former President Roh tried to nullify the maritime border, known as Northern Limit Line (NLL) in the Yellow Sea, during his summit with Kim Jong-il in 2007. The attack was an effective political maneuver shoring up Park’s support among conservatives and raising questions about Moon’s stance on North Korea.

Song’s book also sheds light on policy and philosophical differences between Roh and U.S. President George W. Bush over the best way to deal with Pyongyang during a summit on Nov. 17, 2005 in Gyeongju, North Gyeongsang.

In Song’s account, Bush pushed hard for closely coordinated sanctions on North Korea to back up international demands for denuclearization. Roh, in Song’s words, countered that point by arguing that would only prompt Pyongyang to further isolate itself from the international community and refuse any change.

Roh was said to have told his U.S. counterpart that “aiding with rice and fertilizer has a higher chance of bringing about bigger changes” in North Korea.

Song, current president of the University of North Korean Studies, quoted Roh as saying after the summit meeting, “I just can’t have a thorough talk with Bush (on North Korea).”