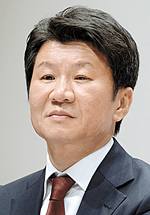 Korean football chief Chung Mong-gyu has called for the public to support the national football team and its skipper, Uli Stielike.

Chung, the President of Korea Football Association, said on Tuesday that he “offers sincere apology” to the public for the recent performance of the national team but emphasized that Korea still has a ways to go until it gains berth to the 2018 World Cup.

The Korean national team is currently ranked third in its group for the final round of the Asian qualifiers for the 2018 World Cup, behind Iran and Uzbekistan. Its current record stands at two wins, one draw and one loss.

After the 1-0 loss to Iran earlier this month, Stielike made a remark that angered local football fans, citing an absence of strikers like Sebastian Soria [a Qatari striker] as the main reason behind the loss.

He later explained that he was merely trying to say Soria’s performance should be studied, but some fans couldn’t tolerate Stielike comparing Korean athletes to others, and they not only questioned his leadership but called for his resignation, as well.

“I’ve seen his work for the past two years and Stielike has great passion and love for Korean football,” the chief said. “But the disappointing results from the matches and criticism that followed have forced him to the edge.”

Chung added that he felt it was the result of a “difference in culture between Korea and the West.”

He continued, “We are accustomed to coaches making apologies. But in Western culture, it’s about discussing what went wrong in the game. While explaining the details of the game, I think it was seen as if he was blaming someone else or making excuses.”

Stielike and the national team are cornered in a cul-de-sac at the moment as they prepare to host Uzbekistan on Nov. 15 for the fifth match of the final qualifiers. If Korea wins the match, it will step up to second place in the group, which would jack up Korea’s chance for its ninth consecutive World Cup appearance. But a loss could make it difficult for Korea to enter the coming quadrennial event, which would be the first time in over 30 years.