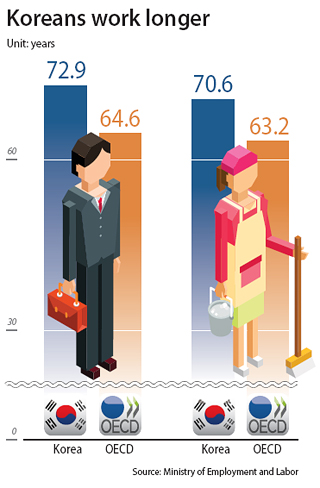 As Korea’s population ages rapidly and the older generation has a harder time finding jobs, the government is seeking to improve their working conditions and opportunities.

The Ministry of Employment and Labor said Wednesday that it will extend its career service programs next year to include those up to age 69. Currently, the program is available for Koreans ages 18 to 64.

The government will now provide three free career counseling services to all middle-aged Koreans who are in the work force. The program will also give various benefits to companies that hire Korean seniors and the job training program for seniors will now focus more on newly developed technologies, as they are found to be falling behind in these areas compared to the previous generation.

“Koreans leave their jobs when they reach about 50 years old but stay in the labor market until they reach 72 years,” said Lee Ki-kwon, minister of employment and labor.

“Middle-aged Koreans worry about what to do for at least 20 years after they leave their longtime job and the government now plans to make an environment that will treat all employees and job seekers based on their abilities rather than age. We will make a labor market where parents and children can work together.”

The government also is expanding job training programs. Korea’s middle-aged population’s abilities to solve language and math problems is one of the worst among OECD countries. According to the Employment Ministry, Korean adults in their 50s and 60s scored 244 in the language section and 232 in the math section of the OECD’s standardized test, which is lower than the average score of 255 and 253 respectively.

Korea’s younger population, however, performed 200 percent better on the exam compared to their senior counterparts.

Among OECD countries, Korea works the longest. The average retirement age for Korean men is 72.9 and is 70.6 for women while the average retirement age among other OECD countries is 64.6 for men and 63.2 for women, as of 2014. Recent data also showed that 61 percent of Koreans ages 55 and 79 said they would like to continue to work regardless of age.