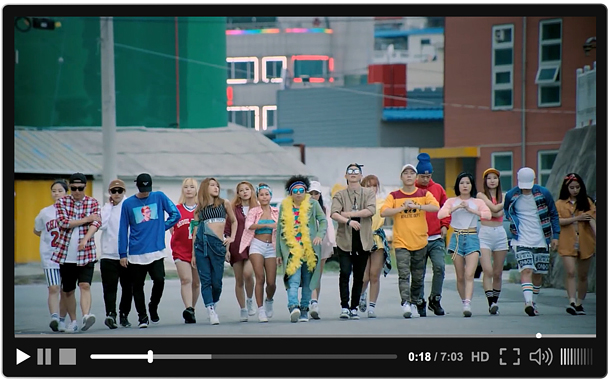 The “Arari·Yo!” video created by the Korean government to promote a dance video contest related to the 2018 PyeongChang Winter Olympics has triggered criticism from netizens for its poor quality. [YOUTUBE CAPTURE]

Criticism has mounted recently over a music video that the Korean government revealed on YouTube late last month to promote the 2018 PyeongChang Winter Olympics, with some netizens saying its poor quality makes it an embarrassment, particularly as a way to introduce Korea to the world.

Titled “Arari·Yo!,” the video features a modern version of the Korean folk song Arirang sang by Hyolyn of girl group Sistar. Renowned Korean comedians and athletes join the singer in the video.

The almost 4-minute long video is about singers entering Pyeongchang, Gangwon and getting infected by a virus called “CSM” that stands for “Can’t Stop Moving.” The residents and athletes all end up dancing wildly.

One netizen commented on the video, “It’s the worst promo video ever. Why on earth are people trying to put all the K-pop things in the Olympic trailer?”

Another said, “Korean [people], I know you guys can do much better than this,” while another went so far to say “If I were a Korean, I’d kill myself because of this.”

People were particularly angry given the fact that the culture ministry used a whopping 270 million won ($239,940) for the video. Some netizens remarked that considering the low quality of the video, a huge sum must have been spent on getting Hyolyn to star in it.

Commenters compared the video to the teaser trailer for the 2020 Olympic Games in Tokyo unveiled at the closing ceremony of the Rio Olympics in August. In it, Prime Minister Shinzo Abe is disguised as Super Mario and other Japanese elements appear such as scenes from manga cartoons.

Critics added that unlike the teaser trailer for the 2020 Olympic Games in Tokyo, there are no distinctly Korean elements in the video, and it neglects to show any distinctive parts of Pyeongchang, a scenic place with remarkable mountains.

As criticism increased, the culture ministry made a statement on Tuesday saying that the video is not an official teaser trailer for the PyeongChang Winter Olympics, but rather is a video to promote a contest for dance videos related to the event.

The contest is dubbed “2018 PyeongChang Winter Olympics Dance Video Contest.” People are encouraged to download “Arari·Yo!” online and make a video including the song. Submission can be made until Dec. 31 on the official website. There is a $60,000 prize for the winners.

The ministry added that an official teaser trailer for 2018 PyeongChang Winter Olympics will be released next week.

The ministry also defended “Arari·Yo!” in the press release, saying that on the Facebook account for the song, the video got more than 220,907 likes and only one angry reaction as of Tuesday. (The number of likes as of Wednesday 3 p.m. was 234,449, and there were 29 angry reactions.)