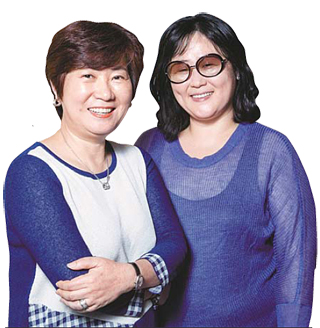 The first items made by Film Goods, a company that produces promotional merchandise for movies, were a pink notebook and golden book clips made for the release of the movie “Carol.” The stationery goods were so popular, supply could barely meet their demand. Below are the edited excerpts of an interview with Film Goods CEO Woo Hea-jyoung and manager Yoo Jin-a, who spoke to M Magazine, an affiliate of the Korean JoongAng Daily, about their business.

Q. What is the reason you jumped into this new business?

A. Woo: The demand for printing has largely dropped and, therefore, we needed a breakthrough. We mulled over a new business connected to movies and concluded that movie goods would be the best choice.

Yoo: We wanted to do something creative based on film. We have been designing the business plan for two years, and we received a business license [for Film Goods] in March.

Wasn’t there a time when a press kit functioned as the main means for advertisement?

Yoo: In the early 2000s, press kits reached their heyday. Since lots of young designers jumped into the printing business, design and font sizes were extremely diverse. One of the movie press kits that I remember the most is filmmaker Kwak Kyung-taek’s “Typhoon” (2005). Each copy was manually bound using a rubber band.

How do you think advertising has changed?

Yoo: In the era where social media functions as one of the main means for communication, movie goods have become the new channel for advertisement. This means that a photo that a moviegoer posts online brings about a dramatic ripple effect. I also liked the concept that these items, which were merely advertisements before watching the movie, turn into cherished goods after enjoying the film. Audiences wish to possess and take home something relating to the film instead of just forgetting about it after finishing the movie.

Woo: Although the term ‘goods’ has been coined only recently, interesting promotional materials have always been around. Distributing chocolates inside a pill packet when promoting a film dealing with a pharmacist is an example. However, back in the day, people could not predict that this kind of marketing would become a mainstream business. I believe that more companies working exclusively on movie goods will soon be created.

Do you have an interesting story of searching for materials to make movie goods?

Yoo: These items are produced in a small quantity instead of being mass-produced at a factory. This means that we have to personally look for and buy the necessary materials. It has almost become a daily routine for us to visit markets in Euljiro and Jongno in central Seoul. One of the good things about visiting there is that we often get lots of good ideas while on our way. In order to turn an idea into a tangible product, it takes around 15 days. For others that require a foreign production process in China, for example, it can take up to a month.

Film Goods officially launched its business in early October. Do you have specific plans on how to run the new business?

Yoo: I wish to open a ‘goods cafe,’ where anyone including both locals and foreign tourists can freely visit. Of course, in order to achieve that plan, I would have to discuss publication rights issues with film companies.

Woo: I hope Film Goods can grow to become a company that can provide practical help in developing movie goods from designing to producing them. In fact, I hope our company becomes the top brand for handling movie goods. (laughs)