The light and shade of Incheon

The light and shade of Incheon 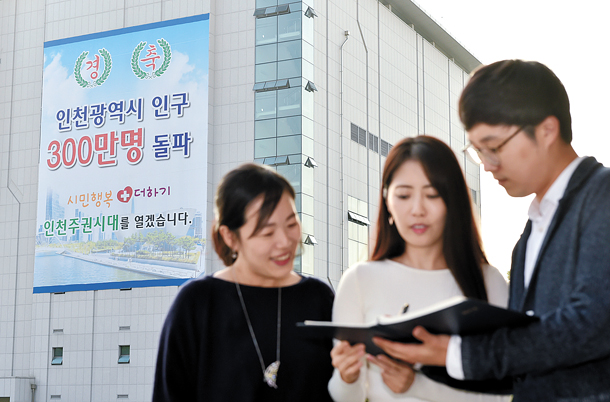 Incheon city’s population surpassed the 3 million mark on Wednesday. Considering the current rate of population growth, Incheon is expected to be the last Korean city to have a population of more than 3 million. By 2040, it will catch up with Busan, which currently has about 3.55 million residents. Then, Incheon will be the largest city after Seoul.

“Development” played a role in Incheon growing to become a city with 3,000,013 million residents. International areas like Songdo, Yeongjong and Cheongna were planned, and large-scale apartment complexes were built. People could buy homes in Incheon with their lease deposit in Seoul. Public transportation connecting Incheon with Seoul and other cities expanded. The “lease refugees” and people mostly in their 20s to 50s moved to Incheon.

Incheon Metropolitan City officials are eager to improve its reputation as the size of population is a measure of city’s competitiveness. Incheon is in the capital region but has been considered a fringe location of Seoul and Gyeonggi province. Its population surpassed Daegu — currently 2.51 million — 17 years ago in 1999, but it was considered the fourth largest city after Seoul, Busan and Daegu until recently.

But as Incheon celebrates hitting 3 million residents, it also has concerns. First of all, the population growth is caused by social population movement such as rising lease price in Seoul rather than natural factors like increase in fertility rate. If people came to Incheon in search of affordable housing, they may leave Incheon if housing prices in Seoul stabilizes.

Birth rate in Incheon is declining year by year. In 2012, 27,780 babies were born in Incheon. Last year, it declined to 25,490. Incheon is still notorious for huge debts. Incheon’s Namdong Industrial Complex is a major state-sponsored industrial complex, but it is losing vitality, with 75 percent operation in July.

If Incheon wants to build on its population with a new, energetic era, it needs to make attractive offers to keep the population growing. Incheon Citizens’ Coalition of Economic Justice secretary general Kim Song-won said that the city should focus on balanced regional development and the creation of jobs by bringing in businesses and addressing the low birth rate.

Incheon University professor Lee Jong-ryeol advises, “Infrastructure, including cultural and convenience facilities, need to be expanded, and newcomers should be encouraged to take pride in living in Incheon.”

In 2003, Daegu announced that its population would reach 3 million by 2020 and revealed a long-term development plan, Daegu Vision 2020. But 13 years have passed, and its population actually decreased. Young people left for other regions in search for jobs, and the fertility rate dropped. Incheon needs to build on the momentum so it won’t repeat the precedence of Daegu.