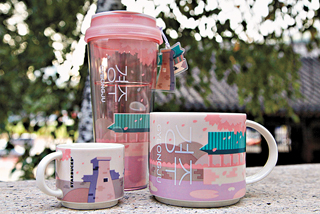 Starbucks Korea has released two types of mugs and a tumbler featuring cultural assets from the historical city of Gyeongju in North Gyeongsang.

Profits will be donated to the city to support restoration efforts after its historical sites suffered damage from several earthquakes in September.

The cups feature Donggung Palace and Cheomseongdae, an astronomical observatory, against a background of cherry blossoms. Both sites date back to the Silla Dynasty (57 BC-935 AD), when Gyeongju served as the kingdom’s capital.

The limited-edition mugs and tumbler will be available until the end of the year at seven branches in Gyeongju, one branch in Seoul and four at Incheon International Airport.

In addition to donating the profits, Starbucks will match revenue earned from the sales to help with the Cultural Heritage Administration’s restoration and preservation of Gyeongju’s cultural assets. The company has been a partner of the government’s cultural agency since 2009.

Last September, Starbucks released city mugs and tumblers featuring sites in Incheon, Daegu, Daejeon, Ulsan and Gwangju. Along with the release of the Gyeongju edition, the company added new editions associated with Seoul, Busan and Jeju Island, all sold in each respective city.