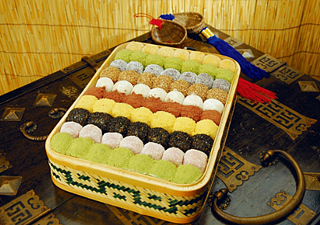 A middle-aged man from Chuncheon, Gangwon, who presented a policeman with rice cakes worth 45,000 won ($40) has become the first case nationwide to be filed with the courts as a violation of the new antigraft law enacted last month.

On Sept. 28, the first day that the Improper Solicitation and Graft Act came into effect, a small business owner in his 50s presented an investigator at Chuncheon Police Station with a box of tteok, or rice cakes, as he was in charge of a case the business owner had filed earlier.

The investigator immediately returned the gift and reported it to the police station’s audit department.

The Supreme Court confirmed that the Chuncheon Police Station filed the case with the Chuncheon District Court on Tuesday as a violation of the new act, often referred to as the Kim Young-ran Law, after the former head of the anticorruption commission who authored the initial draft.

The gift-giver said that he presented the rice cakes to “express thanks” to the policeman who had adjusted investigation hours to accommodate the man, according to the Chuncheon police.

He had given the rice cakes to the investigator to share with his coworkers at the police station and had not thought it would cause an issue, reportedly testifying that he did not know “giving the rice cakes would become such a burden to everybody.”

He had thought that since the rice cakes were under 50,000 won, they would be allowed since the new law limits gifts and entertainment given to “public officials” — which broadly includes civil servants, lawmakers, teachers, journalists and their spouses — to meals worth 30,000 won, gifts worth 50,000 won and wedding or funeral gifts worth 100,000 won.

But the law also prohibits benefits below these thresholds if they are related to the direct duties of public officials, and police determined that the business owner’s present was directly related to duty and filed the case with the court.

Under the interpretation of the law by the Anticorruption and Civil Rights Commission, which largely handles violations of this act, it is problematic that the plaintiff gave a present to the investigator directly in charge of the case he was involved in, even though it is under 50,000 won, because such an act is determined as having a direct relation to duty.

The Chuncheon Police reported the case with the Chuncheon District Court, which will review it and give the gift-giver and prosecutors an opportunity to submit written statements before it settles upon a fine.

The plaintiff may face either a summary or regular trial, which can become prolonged.

If the court determines that this case is in violation of the Kim Young-ran Law, the violator could be fined between two to five times the cost of the present, which in this case would mean up to 225,000 won.

Because the investigator who received the rice cakes reported the case himself, he is not expected to be penalized.