Ewha president forced to step down by protests

Ewha president forced to step down by protests 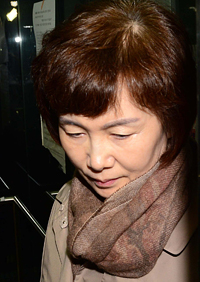 It was the first time in Ewha’s 130-year history that a president quit before completing her tenure.

“I have decided to resign so that the university will no longer remain divided but continue on a path of harmony and trust,” Choi said in an official statement Wednesday. “I want to assure everyone, though, that there was no special treatment, nor could there have been, for a student athlete at Ewha.”

Chung Yoo-ra, granddaughter of Choi Tae-min, who was a mentor to President Park, is accused of getting a free ride in the admissions process and earning academic credit and grades despite frequent absences.

Chung’s mother is Choi Seo-won (who changed her name from Choi Soon-sil), daughter of Choi Tae-min. The media often describes her as Park’s confidant. Chung’s father, Chung Yoon-hoi, was chief of staff to Park when she was a second-term lawmaker.

When allegations that Chung enjoyed special status at the university surfaced, some 100 professors announced their intention to hold a rally on campus to demand the ouster of the president, the first time in Ewha’s 130 years that professors called for a president’s resignation.

The rally was held Wednesday even after the president resigned.

“What’s happened on campus over the past two months has shaken our belief in the university and its founding spirit,” said Park Kyoung-mi, a professor of Christian studies at the university. “For one, Choi called 1,600 police officers to crack down on student protesters, and instead of meeting the students for a dialogue, suggested that those engaged in a sit-in may not be students but outside forces.” 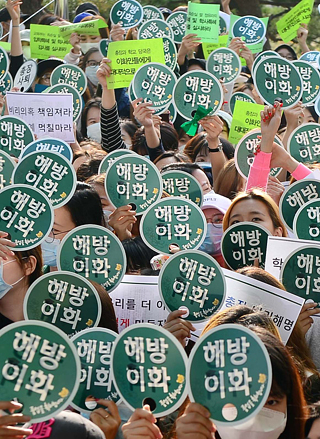 Students at Ewha Womans University celebrate in front of the campus headquarters on Wednesday after the school’s president announced her decision to step down. [NEWSIS]

Students have been engaged in a sit-in for 84 days as of Wednesday which sparked from a university plan to build a college of continuing education despite students’ opposition. They said on Wednesday afternoon that deliberations on whether to end the sit-in are ongoing.

“Since then, allegations concerning Chung surfaced,” Park said. “President Choi had turned the campus into a greedy marketplace and a bureaucratic authoritarian system, and professors reached a decision to oust the dictator and save the students.”

At the rally Wednesday, professors demanded the safety of students engaged in the sit-in be ensured, including protection from disciplinary action, and reform in the selection process of the president and the organizational structure of the university, including its board of directors.

Students still face police investigations for engaging in the sit-in and, according to police, locking university staff in a building.

Thousands of students joined professors at the rally, marching with them and shouting “Free Ewha” and “Away with corruption.”

“Given Choi’s failure to communicate with the students and the rest of the university, in addition to her decision to stick the police on students instead of trying to speak with them,” the student protesters said in a statement, “it is only right that Choi is stepping down.

“Still,” they added, “we regret that she did not apologize to the students before she resigned, and hereby request that all measures be followed through to cancel admissions of students that are found to have been admitted unfairly.”

Professors also called for a thorough investigation into the allegations about Chung.

“We will remain vigilant in inspections at the university,” Park said, “and we will find out if Choi and her aides and the Park administration had anything to do with the corruption allegations.”