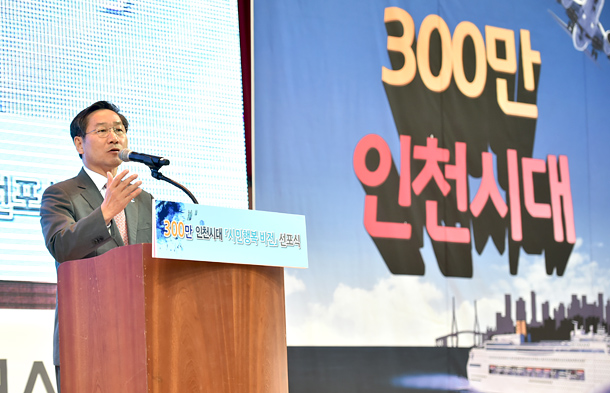 Incheon’s population hit 3,000,013 as of 1 p.m. on Wednesday, marking the first time in 36 years that a Korean city’s population broke the 3-million mark, coming in third after Seoul and Busan.

This increase in population is in contrast to cities like Seoul, Busan and Daegu, which are experiencing drops in their numbers of residents, mainly due to low birthrates and, especially in Seoul’s case, high rent prices. At the end of May, Seoul’s population plunged below 10 million for the first time in 28 years, according to the Ministry of the Interior. Busan’s population fell from 3.56 million in 2008 to 3.50 million last month. And Daegu’s population dropped from 2.49 million in 2008 to about 2.48 million last month.

“Given the general trend of population reduction throughout the country, no other city may surpass 3 million people in its population count after Incheon does,” said Jeon Moo-soo, head of the local administration bureau of Incheon city government. “At this rate, Incheon’s population may surpass that of Busan by 2040.”

Korea had the lowest fertility rate last year among OECD countries. According to Statistics Korea, 215,200 babies were born in the first half of this year, the lowest since 2000. Still, experts say it wasn’t a change in the birthrate that contributed to the rise of Incheon’s population. The average number of births per woman last year was 1.24 in Korea and 1.22 in Incheon.

“I moved to Incheon because leasing an apartment in Seoul became too expensive,” said Yoon Soo-in, a 35-year-old who moved to Incheon this month from southern Seoul’s Gangseo District. “The city is close to my workplace and the environment is superb here, so I’m happy that I moved.”

According to Statistics Korea, among the 137,256 people who moved out of Seoul last year, 11,345 moved to Incheon. For many, it was the rise of rent in Seoul that drove them out of the city.

“Apartment prices in Seoul rose too much,” said Seo Jong-hee, a 37-year-old resident of Incheon who moved in last year. “I bought an apartment in Songdo after hearing good things about the city’s living standards and proximity to nature.”

Incheon city government says it was also the establishment of free economic zones in the city, like Songdo, Yeongjong and Cheongna, and the development of large apartment complexes, which attracted more people to the city.

When free economic zones were established throughout Incheon in 2006, they attracted 258,477 new residents to the regions’ apartment complexes that year, according to the city government. Incoming international organizations and companies also boosted the number of foreign residents there, which grew from 16,552 in 2000 to 91,525 last year, according to the Incheon city government.

In light of its growth, Incheon city government is making preparations to provide a higher quality of life for its residents.

“In breaking the 3 million mark,” said Incheon Mayor Yoo Jeong-bok, “Incheon will meet residents’ expectations and become a city that provides great quality of life for its residents.”

The city recently changed its brand from “Fly Incheon” to “all ways Incheon,” a shortened phrase from “all ways lead to Incheon.”

The size of the city has also been growing to house incoming industries and people.

According to the Incheon city government, the city will become the largest in the country by November, as it will absorb a 5.4 square-kilometer area from the Incheon International Airport. Incheon’s land area will then exceed the size of Ulsan, currently the largest city by land size.

“The population growth of Incheon is not natural but is highly influenced by the outflow of residents from Seoul escaping the high rent prices there,” said Choi Byung-dae, professor of public administration at Hanyang University. “Incheon could easily become a commuter town. The city government will have to actively build business opportunities for companies and create jobs to prevent it from becoming one.”