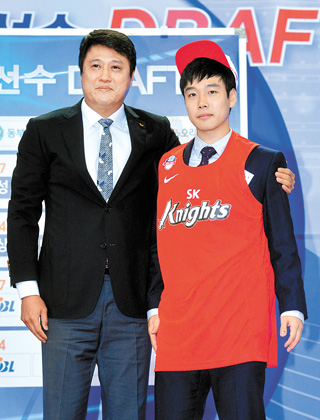 They kept the fans waiting long enough but the professional basketball league of Korea is finally here, starting the five-month journey of its 2016-17 season this weekend.

The Korean Basketball League (KBL) rookie draft is often a drama-filled prequel to the league’s coming season. At this year’s draft, one of the highlights was Kim Jun-seong, a semi-professional player and an underdog who emerged out of nowhere.

Everyone’s attention at the draft was on the trio of Lee Jong-hyun and Kang Sang-jae of Korea University and Choi Jun-yong of Yonsei University. Headlining the three, the rookie draft this year was considered possibly the best the league has seen since its birth and many experts say their debut is expected to reshape the landscape of the league.

But then there was Kim, a 1.77-meter (five feet eight inches) guard whom Moon Kyung-eun, the Seoul SK Knights head coach, picked ninth in the second round of the draft to great applause. But many in the audience were left wondering, “Who is Kim?”

After the announcement, Kim himself was dumbfounded and went up to the stage with tears in his eyes.

“Everyone doubted me,” Kim said, unable to control his emotion. “My mother was the only person who told me I had a shot. Two years ago, when I went undrafted, my father was in bed and was undergoing chemotherapy. Thank you so much for giving me this chance. This is a new beginning for me. I will always stay humble and work hard.”

Kim’s mother, who was present at the draft, was also seen crying as her son expressed his gratitude for the opportunity.

During the interview after the draft, Kim said, “Around the 2014 rookie draft, my father was diagnosed with liver cancer. To help the family, I stayed away from playing ball and did any part-time work I could find, serving coffee at a coffee shop or working at a funeral home.”

But Kim did not give up on basketball. He spent his weekends coaching children’s basketball classes. He grabbed the ball once more this March to play for a semi-professional team. “My father said whether I succeed or not, I am his son,” said Kim. “That gave me the courage to be back on the court. I am an only child and basketball is the only way I know to reciprocate the love and support that my parents showed me.”

He added, “We [Kim’s semi-professional team] didn’t have a home court to play or living quarters. I travelled across the country without a team bus and played exhibition games against high school teams. I considered this draft would be my last shot. I cannot help but recollect all the hardships I faced until I came here.”

Moon, the head coach of the Knights, said, “I wanted to pick him in 2014 but he didn’t meet my expectations in terms of scoring. However, I looked at his recent performance and he’s been averaging 20 points per game. I could see how hard he’s worked over the past two years. I hope his desire and determination to play bring positive effect to our team.”