Twins face down Dinos in round 3 of postseason

Twins face down Dinos in round 3 of postseason 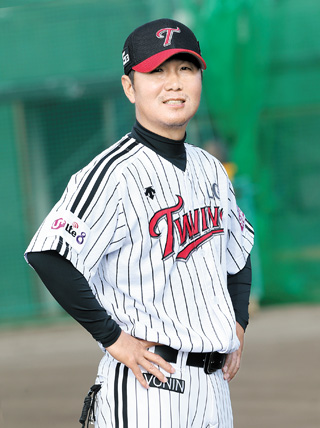 Yu Ji-hyeon, the base coach of the LG Twins and a former Twins player himself, says his team’s run this fall will be the impetus for development in the future. [LG TWINS]

The LG Twins will be facing the NC Dinos starting today for the third round of this year’s Korea Baseball Organization (KBO) postseason, the last round before the Korean Series, where the Doosan Bears await the winner of this final playoff. Yu Ji-hyeon, the Twins’ base coach, normally a man of few words, has been more vocal than ever.

“[The experience from this season] could be the impetus for the development of our team for the next five years,” said coach Yu.

Coach Yu is one of the rare franchise stars of the KBO, staying with the Twins for better and for worse. Roaring into the league in 1994 as one of the rookies to watch, Yu quickly gained stardom as the leading batter of the Twins as well as a shortstop who would continue the legacy left by Kim Jae-bak, who is to this day considered one of the best shortstops in the history of Korean baseball.

In his first year in the pros, Yu helped his team lift the championship trophy, the Twins’ second Korean Series title since their inception, and made the Twins a regular at the postseasons for a decade thereafter. In 2002, the last time the Twins made it into the Korean Series, Yu was the captain.

Although he took off his glove in 2004, he donned the Twins uniform again the next year, this time as coach. But since then, unlike Yu’s heyday with the Twins, his beloved club started to fall into a downward spiral, failing to qualify for the playoffs for ten straight years since 2002.

Although the Twins enjoyed a brief stint in the postseason in 2013 and 2014, never were they able to return to the Korean Series. For that reason, the fall of 2016 bears more meaning for Yu than anyone else. “This fall feels a lot similar to the fall of 1994,” said the coach.

The Twins this year are a young team, with those in their early to mid 20s enjoying time on the field.

Veterans such as Park Yong-taik keep the Twins’ batting lineup balanced in the middle while young talents add vitality and fighting spirit to the team.

Looking back to 1994, it was also young players who were pivotal then. The starting lineup of the Twins during the Korean Series in 1994 had five rookies, including Yu. “Older players pulled us forward,” Yu recollects. “They were the pillars of our success and all I had to do was give all I had on the ground. I felt no pressure and the synergistic effect we had with older players eventually led to our success, I think.”

Catcher Yoo Kang-nam, who cranked out the game-winning homer during the third match of the first round of the playoffs against the Nexen Heroes, says that’s the exact dynamics of the Twins this year. “Jeong Seong-hoon [one of the veterans of the team] gave me advice, especially about missing the hit during my previous at-bat,” said Yoo. “He told me what I should do and I was able to swing my bat more boldly.”

“The amount of effort you put into one postseason game is equal to the amount you spend in 10 regular season games,” Yu said. “I know it must have been difficult for our players to handle the pressure but they overcame that,” he noted, referring to the final game of the wild-card series, where the Twins would have been ousted if they had lost the match. “That’s when we started our upward trajectory.”

Yu, who knows the sweetness of a championship title win and the bitterness of defeat, added, “This season was an especially difficult one for us, since we had so many troubles and hoopla in and out of the stadium. But this united us as a team. Overcoming the challenges and heating up the playoff fever, such experiences will shape our team for the better and for the next five years and beyond, it will help us grow.”