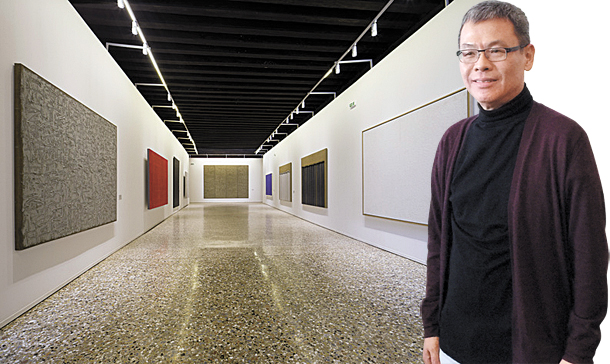 Left, the “Dansaekhwa” exhibition organized by Kukje Gallery and Boghossian Foundation as part of the official Collateral Events of the 56th Venice Biennale last year. After seeing the show, the world’s famous collector Budi Tek, Right, decided to hold a large-scale exhibition of dansaekhwa, or Korea monochrome paintings, in 2017 at Yuz Museum Shanghai he founded. [KUKJE GALLERY, MOON SO-YOUNG]

Invited to take a view of the Korea International Art Fair (KIAF) that wrapped up on Sunday, the world-famous collector Budi Tek unveiled on Monday plans to hold a large-scale exhibition of dansaekhwa or Korea monochrome paintings next year at Yuz Museum Shanghai that he opened in 2014 in the Chinese city. Through conversations with Korean journalists and art experts, he helped provide a new perspective about dansaekhwa in the global context.

And Tom Tandio, who came to introduce his favorite young Indonesian artists to Korea through an exhibition, expressed his philosophy as a young collector supporting his country’s artists not in the Western-oriented mainstream, which could inspire Korean collectors in his generation.

Budi Tek, 59, a Chinese-Indonesian entrepreneur and collector, met the Korean press on Monday at the Grand Hyatt Seoul hotel. 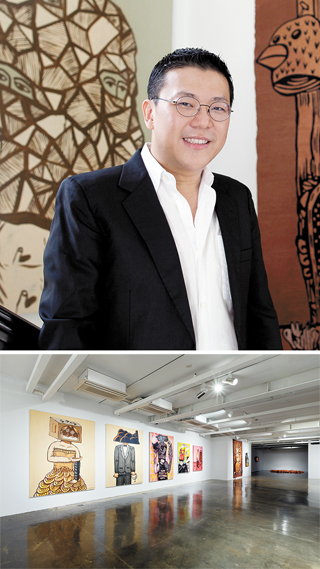 Tek has been actively collecting Chinese contemporary art pieces over the last decade and extending the collection to other Asian and Western art in the recent years. And he has been supporting art research through the Yuz Foundation he set up in 2007. He was named one of the “10 Most Powerful People in the Art World” by the New York-based art magazine Art+Auction in 2011.

“Dansaekhwa have in them spiritual questions about humans and their relations with nature, which I think succeeds to the Taoist tradition of Asia,” Tek said. “It would help find Chinese art’s missing links.”

Meanwhile, the 36-year-old art collector Tom Tandio met the press on Oct. 13 at Songeun Art Space in southern Seoul. There he launched the exhibition of his collection, which features nine teams of young Indonesian artists, including Eko Nugroho and Melati Suryodarmo.

“When I find an artwork that catches my eyes, I don’t directly buy it but I study the artist’s concepts and meet the artist in person,” he said. “If he or she has integrity, then I become friends with the artist and then purchase his or her works continually. So many of the artists of the works I collect tend to be in my generation and I share visions with them.”