More foreign workers are in their 30s, 50s

More foreign workers are in their 30s, 50s 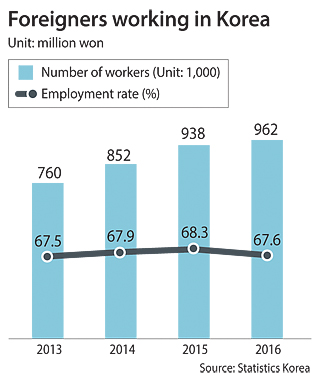 The number of foreign workers reached an all-time high this year, and more of those workers are in their 30s and 50s, the government said Thursday.

Although the employment rate for foreigners in Korea dropped 0.7 percentage points year-on-year to 67.6 percent as of May, there is a larger pool of foreigners seeking employment, Statistics Korea said. More overseas Koreans, or those with Korean ancestry who grew up abroad, entered the country. Fewer overseas Koreans are looking for work compared to other foreigners.

The number of foreigners in the labor market exceeded 1 million for the first time this year, rising 1.9 percent, or 19,000, year-on-year to 1,005,000. There were 962,000 foreigners working in Korea, which is a 3.7 percent increase over the previous year and a high since 2012, which is when the government started to compile the data in its current form.

“The data shows that there are more foreigners in their 30s and 50s who find jobs in Korea,” said Shim Won-bo, a director at Statistics Korea.

“A large number of Chinese, including Korean Chinese, are entering the country to find jobs, while those coming from North America continued to decrease,” said Shim.

The number of Korean Chinese rose 0.9 percent to 441,000 of the total foreign workers, and they accounted for 45.9 percent. Vietnamese made up 7.4 percent of workers and non-Korean Chinese comprised 6.6 percent. The population of North American workers fell 14 percent to 45,000.

Most foreign workers are employed in metropolitan Seoul. Data showed that 41.8 percent of foreigners worked in Gyeonggi and Incheon and 21.5 percent worked in Seoul.

The unemployment rate for foreigners in Korea fell 0.7 percentage points to 4.2 percent this year, but the rate still is higher than the nationwide rate of 3.6 percent as of September.

Among foreigners who said they wanted to stay longer, 65 percent said they would like to extend their visas and 15.9 percent were interested in permanent resident cards.