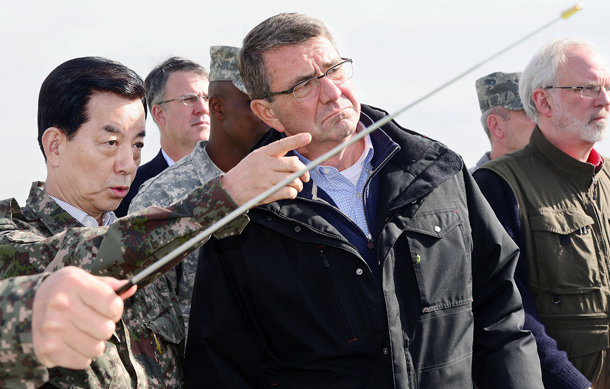 With three weeks left until the U.S. presidential election, the third and last television debate was held at 10 a.m. on Oct. 20, local time.

While the Choi Soon-sil scandal is the center of news in Korea, the U.S. presidential election is a crucial issue here. Depending on the new government succeeding the Obama administration, U.S. foreign policy, especially its Korean Peninsula strategy, may change drastically.

From earlier this year, the Japanese government and Diet members reportedly tried to get familiar with foreign policy strategists of the Trump camp.

It is vain to compare Korea’s rushed attempt to get to know Donald Trump only two months before the election to Japan’s carefully planned strategy, leaving all possibilities open. It is fortunate and worthy to note that the two camps’ views on the Korean Peninsula situation are not much different.

The days are gone when the United States oscillated between dialogue and sanctions over how to approach the North Korean nuclear issue. It is not unrelated to the fact that North Korea’s nuclear missiles program is advancing rapidly. Once North Korea possesses intercontinental-ballistic-missile technology that can load nuclear warheads, it will be acknowledged as a direct threat to America’s security, regardless of its performance or power. Then, it will be hard to deny a game change will happen whether we like it or not. In both Clinton and Trump camps, we can sense that military options like a preemptive strike won’t be excluded.

Next year will mark the 10th anniversary of confrontational relations with North Korea. Political mud-slinging made it clear that the theories of a decade of dialogue have become unfamiliar now. A pro-Park politician recalled that this was a time when there were multiple channels under the justification that the inter-Korean relations should be managed. He added that it was nothing incomprehensible. But the problem is that the politicians do not trust each other and instead engage in a cycle of endless debates. A solemn moment is approaching in international politics with the power change in the United States, and many wonder how the politicians can still obsess over political engineering and calculations.

When the parliamentary inspection ends, the presidential election here will be right around the corner. The ruling and opposition politicians and presidential hopefuls need to clarify their convictions and principles on the dilemma of inter-Korean relations and the Korea-U.S. alliance. The controversy over the memoir has shown that “flexible application of principles” is mere word play.


*The author is a deputy political news editor of JTBC.