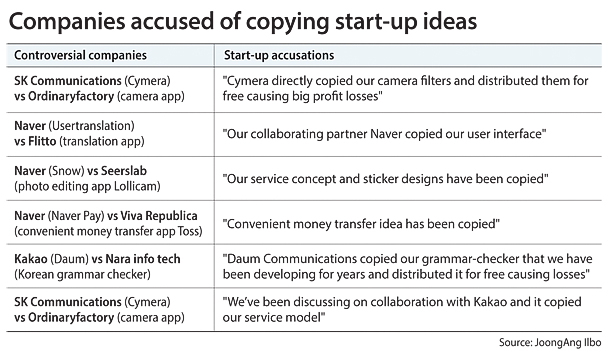 For as long as there have been burgeoning start-ups with novel ideas, there have also been the big established companies accused of copying them.

Just this year alone, Naver, Kakaoand SK Communications have all faced accusations that their new services were taken straight from Korean tech start-ups. In a country wary of the power of conglomerates, the copycat services raised concerns about large companies strong-arming their smaller and weaker counterparts.

In July, Seerslab, a start-up that operates the photo editing app Lollicam, accused Naver of stealing its concept. “Naver’s Snow copied Lollicam’s service format, which first recognizes users’ faces and puts sticker decorations on them along with sticker designs and
background music,” the company said in a report

Naver’s Snow has been nicknamed — for better or for worse — the “Asian Snapchat” and boasts 25 million monthly active users based on data up to the end of June, while Seerslab’s Lollicam has only been downloaded six million times as of September. 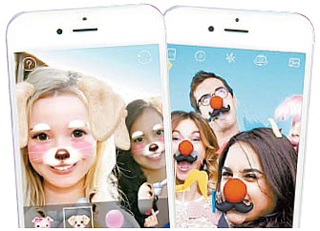 “We posed the problem because investors would ask us, ‘Naver is doing the same thing so will you be able to succeed?’ and I thought larger companies that were already dominating certain market segments could be a threat to the start-up ecosystem,” Michael Chong, CEO and founder of Seerslab, said in an interview Tuesday.

In a rebuttal, Naver said that “the sticker service on videos was a format offered by other apps even before Lollicam was released” in May 2015. The company also pointed out that other apps like MSQRD (which was acquired by Facebook), Snapchat, Camera360 and KakaoTalk Cheez had similar features.

Kakao, the developer of KakaoTalk Cheez and operator of the country’s most widely-used messaging app, has been accused of stealing the ideas of start-ups that it was looking to potentially acquire.

The allegations were compounded by the fact that Kakao had acquired a different parking-related start-up called Parking Square earlier this year to prepare for the launch of Kakao Parking.

Kakao says the start-up’s claims are unfair, arguing that automatic payment systems in parking lots are a common technology already used by many companies.

“Larger companies simply think they can create what [start-ups have come up with] at a faster rate and are less interested in acquiring start-ups,” said Lim Jung-wook, managing director of Startup Alliance, a nonprofit organization that helps start-ups go global. “Local companies need to put more effort in appreciating the ideas of start-ups and starting new businesses through mergers and acquisitions.”

However, the line between plagiarism and competition can get blurry. “We can’t question all copycats. We have to examine the detailed development processes,” said Kang Jung-soo, head of the start-up accelerator Mediati. “We can’t criticize all large companies just because they jumped into the same business when there were already quite a number of competitors offering similar services.”

This phenomenon is already common in the United States. In August, for example, Instagram added a new function to its app called “Stories” that was strikingly similar to Snapchat’s feature of the same name.

Rather than hide from copycat claims, the company doubled down. CEO Kevin Systrom brazenly said in an interview with TechCrunch that
Snapchat “deserved all the credit.”

“This isn’t about who invented something,” he said. “This is about a format, and how you take it to a network and put your own spin on it.”

“The success of a business is influenced not only by the idea but more detailed service designs and marketing capabilities,” said Steve Seil Oh, managing partner at Inventus Intellectual Property Group. “And rather than being too protective of ideas, the U.S. prefers to leave it to free competition.”

Mediati’s Kang noted that start-ups in China also keep competition in mind prior to proposing ideas. “If a start-up’s business is bound to be fatally hit by a large company’s participation, the idea is not safe to survive the competitive market,” Kang said.