Cream, butter are in short supply

Cream, butter are in short supply 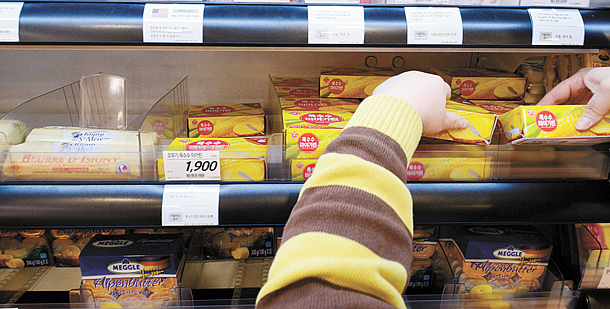 An employee at a discount store in central Seoul stocking shelves with butter on Monday. [NEWSIS]

Gong Byeong-deuk, a baker who runs a shop in Gangseo District, western Seoul, has been having difficulty sourcing domestic cream and butter since last summer. His supplier cut back his daily delivery of 30 500-milliliter (17-ounce) bottles of fresh cream to five, citing a shortage of the product.

“I went to the grocery a few days ago, and butter was all sold out,” said a 27-year-old woman surnamed Kim.

Since a television documentary promoted the idea of losing weight through a high-fat, low-carbohydrate diet last month, butter sales have soared 41.4 percent compared to the same period last year, according to statistics from the discount chain E-Mart.

Raw milk production soared last year, and dairies had trouble finding ways of disposing of it. One milk company was even caught giving milk cartons as part of employees’ wages.

So production has been cut. Raw milk production, which was 2.2 million tons in 2014 and 2015, is expected to be 2.1 million tons this year, according to the Korea Dairy Committee.

“After raw milk production was cut, the supply of pasteurized milk got much closer to market demand,” said a committee spokesman.

But that had a negative impact on fresh cream and butter, which are produced from raw milk inventories. As production was cut to meet the demand for pasteurized milk, the leftovers used to make cream and butter also decreased.

Excess raw milk, the amount left over after pasteurized milk is produced, is made into cream, butter and powdered milk.

In 2014 and 2015, the market had ample supplies of cream, butter and powdered milk because raw milk supplies were so large. In fact, processing companies, who buy raw milk from milk farmers, aren’t enthusiastic about making more of these products. Pasteurized milk is the main milk product consumed by Koreans.

Since 2013, the price of raw milk has been decided every year by the government based on production cost, the inflation rate and an agreement between raw milk farmers and processing companies. As a result, Korean raw milk prices are three to four times higher than in other countries, which weakens the price competitiveness of Korean dairy products in general.

This isn’t a problem for pasteurized milk, which has a short distribution period and can’t be easily exported. But butter, cream and milk powder can be stored for longer.

Those products have to compete with imported products in the market, which are far more competitive. For example, 1 kilogram (2.2 pounds) of Korean powdered milk costs 12,000 won ($10.66), whereas an imported brand costs 3,000 won.

“What we need is a different pricing system that distinguishes milk from other dairy products,” said researcher Jee In-bae at the Korea Rural Economic Institute.