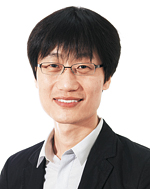 Search engine operator Naver said Chairman Lee Hae-jin and CEO Kim Sang-hun are stepping down from their positions to help the company expand to other major markets, including Europe and North America. Kim will be succeeded by the company’s first female chief, Han Seong-sook.

The transition will be made in May, said Korea’s leading internet portal company, which also owns Asia’s leading instant messaging app Line.

“Lee will be focusing his time on investments while spending time in Europe, where Naver has started expanding,” a company official said. “He is stepping down as chairman of Naver to focus on mapping out Naver’s overseas business strategies and finding start-ups in Europe.”

Lee, however, will retain his current title as Line’s chairman. The instant messaging app went public in New York and Tokyo in June.

Lee has taken interest in expanding overseas for a long time.

Since leaving his position as Naver’s chief strategy officer in 2011, he has practically stepped aside on the Korean businesses.

He has often stressed to top management that unless Naver finds new growth engines in the global markets, they will lag in the competition against global IT companies like Google and Facebook.

Han is Naver’s current vice president. When she takes the helm in March, she will be the only female CEO of the top 30 Korean companies by market capitalization. Han joined Naver in 2007 after working for rival search engine Empas. Since working for Naver, she has spearheaded most of the company’s new products and also led the successful transition of Naver to mobile in the past three years.