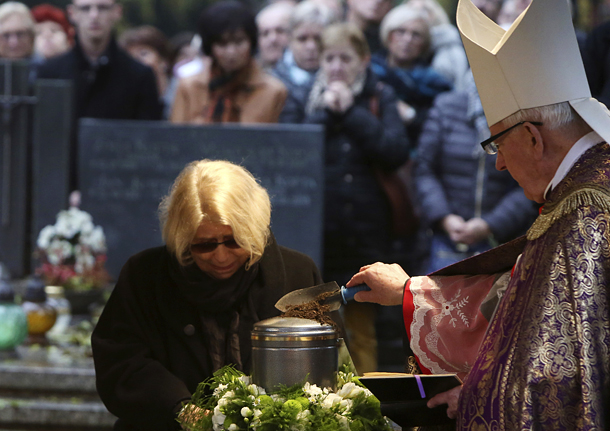 Krystyna Zachwatowicz, widow of late Polish filmmaker Andrzej Wajda, cries by the urn with his ashes during a private funeral service, in Krakow, Poland, on Wednesday. [AP/NEWSIS]

A metal urn with Wajda’s ashes, surrounded by white flowers, and his black-and-white portrait were placed by the altar at the 13th century Holy Trinity church of the Dominican friars in Krakow, southern Poland.

Letters were read out from Polish filmmakers Roman Polanski and Agnieszka Holland as well as from former president and Solidarity founder Lech Walesa, whose struggle against the communist regime inspired Wajda to make a movie about him, “Walesa. Man of Hope,” that won the Cannes Film Festival’s top Palme d’Or prize in 1981.

Wajda’s movies were focused on dramatic moments in Poland’s history, using them to highlight universal themes. Under the communist regime he found a way of speaking to a public yearning for truth and freedom while avoiding clashes with censors.

“He wrote that his movies, even the darkest ones, were made for Poles who would not only die for their homeland but also build its future,” writer Henryk Wozniakowski said.

Wajda made more than 40 films in all and four of them were nominated for Academy Awards: “The Promised Land” in 1975, about ideals lost in a rush to riches; “The Maids of Wilko” in 1979 about the demise of love; “Man of Iron” in 1981 about the rise of the Solidarity freedom movement; and “Katyn” in 2007, about the murder of Polish POWs by Soviet security forces in 1940.

Wajda was laid to rest at Krakow’s historic Salwator Cemetery, where the movie director’s mother is buried.

Wajda died in a Warsaw hospital Oct. 9 at the age of 90, just months after finishing “Afterimage,” Poland’s entry for a foreign language Academy Award.

He is survived by his fourth wife, stage designer and actress Krystyna Zachwatowicz, his daughter Karolina, and former wife, actress Beata Tyszkiewicz. AP